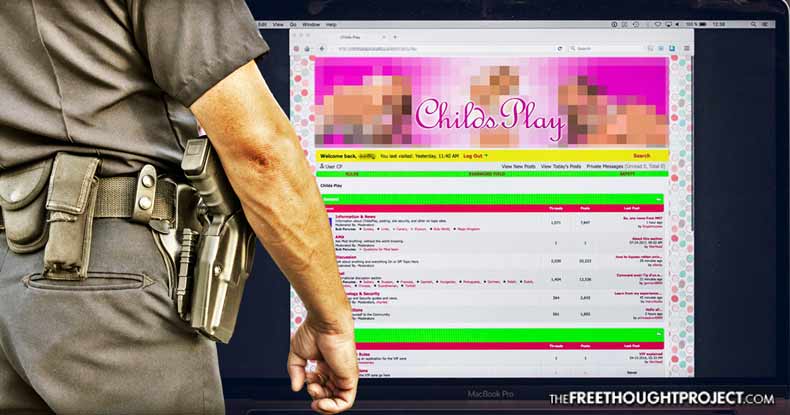 The website involved police officers sharing extremely disturbing content and encouraging followers to engage in sexual acts with children, to maybe bust them.

A recent revelation over trying to nab pedophiles online has raised serious questions that lead many to question the entire job of a public servant’s duty to ‘protect society.’

Well, if you were a police officer in operation Artemis, the questions above, in order, are: as far as they want, as many as they want, yes, yes, and yes.

Even though hundreds of pedophiles were arrested for taking part in the site, the sting involved undercover officers sharing extremely disturbing content and encouraging followers to engage in sexual acts with children. Now, after they have been ousted as the perpetrators of this website, they are saying it was worth it.

A disturbing new report from the Norwegian newspaper VG published the findings of its discovery of the world’s largest child pornography site and how it was run by police.

According to the report from VG:

Only now can we tell the story of how Task Force Argos, the U.S. Department of Homeland Security and the police in Canada and Europe worked to unmask the leaders of the world’s largest online community of child sexual abusers.

From the start, Operation Artemis had a clear objective: identifying victims and their abusers. But in doing so was it necessary for the police to run a child exploitation forum for nearly a year?

IN THE UNITED STATES, A MOTHER WEEPS when she hears that VG has found that pictures of her daughter being sexually abused were shared by members, while the police operated the site.

– My daughter should not be used as a bait. If they are using her images, then she should be paid or compensated for their use. It is not right for the police to promote these images, says the mother.

“We don’t create these sites. We do not want them to exist. When we do find them, we infiltrate and get as high as possible in the networks administrative structure to destroy it. But we will never create a forum for child sex offenders,” says Jon Rouse, one of the lead investigators into the horrifying website.

The operation began when police discovered the two men who created and maintained the site: Benjamin Faulkner and Patrick Falte.

As VG reported, on Friday, 15 April 2016, the website “Childs Play” saw the light of day on the dark web. A lone administrator was in charge of the site, with an entourage of moderators. The administrator called himself WarHead.

Eventually, through the use of underground discussion boards, Faulkner would meet Falte and the duo would go on to admin this most disgusting community of vile humans who get off through watching children suffer.

Indeed, the inner circle of Child’s Play actually shared not only child pornography but videos of children being tortured.

Luckily, however, only a short time after it had begun, police had infiltrated the site because DHS found that Faulkner had his bitcoin wallet linked to his personal email address. So, this sick place for pedophiles to meet and share these horrifying images and videos was shut down and never heard from again, right? Wrong.

Instead of ending it and attempting to investigate those who had already been participating in it, authorities decided to keep it open.

Police, while running the site, also continued to share images and videos while undergoing their year-long investigation which identified numerous video producers as well as consumers of the content. For example, the task force posted a video of an eight-year-old girl being raped only two weeks after taking over the forum, which was viewed 770,617 times, according to the report. Such extreme police tactics, which authorities argue was necessary to rescue victims and put predators behind bars, have outraged some of the victims’ families, noted ZeroHedge.

Imagine for a moment that your child was the victim of a child rapist and photos and videos of these horrifying acts were online and being disseminated to more predators by police.

In response to the outrage, investigators told VG that there is a balance to maintain when attempting to nab pedophiles.

“There is definitely a balance between what we want to achieve and how we go about it.” they said, “Eventually we get to the point where it isn’t worth running the forum any more. But as long as we’re identifying victims, producers and abusers, we will keep running it.”

While arresting hundreds of pedophiles is certainly a benefit, a single video of a little girl being raped was viewed nearly a million times. How many pedophiles actually became worse and were feeding off this site as police continued to operate it? How many sickos, who may have been on the verge of going out and harming a child were triggered by this website being allowed to stay open? 770,617 views to only a few hundred arrests?

Some would argue that the damage caused by keeping such a vile operation open does much more harm than good. And, some would be right.

“He who fights monsters should see to it that he himself does not become a monster. And if you gaze for long into an abyss, the abyss gazes also into you.”
— Friedrich Nietzsche, Beyond Good and Evil