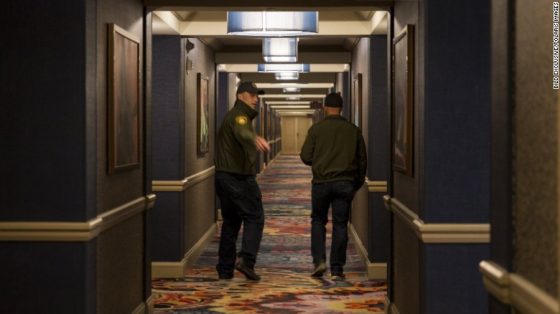 In the week following the Las Vegas massacre, the carefully crafted narrative presented by the mainstream media has been incredibly difficult to choke down, especially to those who constantly seek the truth. But the truth is, the narrative is changing again, and it’s becoming even more unbelievable.

In a dramatic shift to the original Las Vegas shooting narrative, over a week after Stephen Paddock rained down bullets on a crowd and killed 58 people, late on Monday Clark County Sheriff Joe Lombardo drastically changed the timeline of the deadliest mass shooting in modern U.S. history, and now the gunman allegedly opened fire on a security guard six minutes before he unleashed the massacre. Officials had previously claimed that Paddock, 64, shot Mandalay Bay security guard Jesus Campos only after Paddock had started shooting at the Route 91 Harvest country-music festival from his 32nd-floor hotel suite on Oct. 1. –Zerohedge

This is incredibly important because officials originally credited Campos with stopping the shooting and taking a bullet to the leg. And now the authorities don’t actually know why Paddock suddenly stopped his attack on the crowd below.

As part of the constantly changing story, officials are now saying that police officers who rushed to the hotel room when the shooting began didn’t know a hotel security guard had been shot “until they met him in the hallway after exiting the elevator,” Lombardo said.

The security guard, Jesus Campos, was struck in the leg as the gunman, from behind his door, shot into the hallway on the 32nd floor. Paddock apparently detected Campos via surveillance cameras he set up outside his hotel suite, police have said. Paddock shot the guard at 9:59 p.m. local time, Lombardo said, shortly before raining down bullets on the Route 91 Harvest festival in an attack that began at 10:05 p.m. and lasted 10 minutes. Police officers found Campos when they arrived on the floor. And Campos did not summon police to the 32nd floor of the Mandalay Bay hotel, according to the timeline recently updated by the authorities.

What’s also incredibly interesting, is that eyewitnesses claim to have seen security guards chasing another security guard in the minutes leading up to the massacre. The hotel guest in the room next to Paddock also saw “multiple gunmen.”

An Australian man who was staying in the room next to the shooter in the Mandalay Bay has confirmed he witnessed multiple gunmen involved in the Las Vegas attack. “There were multiple people dead and multiple shooters. I was just hiding waiting for police to come get us. I got outside safely and was hiding in bushes,” Brian Hodge told Australia’s Courier-Mail. Hodge, who was staying in room 32134, right next door to Stephen Paddock in room 32135, also provided important information when he revealed that a security guard was killed by police. “My floor is a crime scene. They killed a security guard on my floor.”

Witness Wendy Miller, also from Australia, said she too, saw a security guard being chased. She was staying at the Luxor Hotel (next to the Mandalay Bay) with her husband. But they had been at a bar in the Mandalay Bay when she saw what she described as a “man of interest” run by. “We managed to make our way back to our room…” she told The Courier-Mail. “We are in lockdown. Our door is deadlocked and a chair against the door.” Miller said she saw the man sprint through the hotel after coming off an escalator from the Mandalay Bay. “The man that they [security] were chasing was wearing a security jacket like them,” she said. –SHTFPlan.com

“This individual purposely hid his actions leading up to this event, and it is difficult for us to find the answers,” said Lombardo of Paddock’s actions in the days before the massacre. “In coordination with the FBI’s behavioral analysis unit, a comprehensive picture is being drawn as to the suspect’s mental state and currently we do not believe there is one particular event in the suspect’s life for us to key on,” Lombardo said. Of course, this changing narrative added diesel fuel to the bonfire of conspiracy theoriesalready swirling on the internet and social media.  Many speculate that the guard could have been an accomplice or played a role in the initiation of this event, which appears to be a false flag.

Although we may never know exactly what happened when it comes to this horrific massacre, it’s important to never stop questioning the official story hand-picked for the mainstream media to propagate.