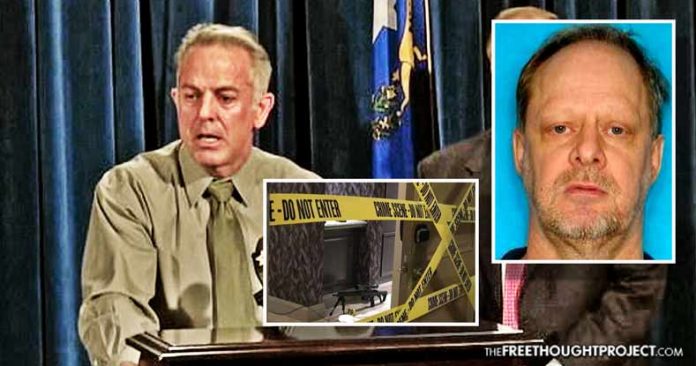 Las Vegas, NV — In an unprecedented reversal, police have dramatically changed their official story this week on how the massacre in Las Vegas unfolded. To be clear, the facts they changed are not some accidents due to mass chaos, ‘whoops we were just confused’, or ‘sorry we got that wrong’ — no, these were a complete reversal of official narratives already determined to be facts and released during press conferences.

The first major reversal in the narrative happened on Monday when officials changed their story to say Stephen Paddock shot a hotel security guard six minutes before he opened fire on the crowd of 22,000.

The official narrative — which TFTP has already given multiple reasons to doubt — was that Paddock shot Mandalay Bay security guard Jesus Campos after Paddock had unleashed his deadly volley at the Route 91 Harvest Festival, an assault that began at 10:05 p.m.

According to the first official timeline, Campos was shot in the leg while checking on an alarm. According to the original police-reported timeline, Paddock never fired on the crowd below again after shooting Campos.

But now, we are being told that is not what happened and we should believe their new story which is completely different. To be clear, this information was simple to find out as all they had to do was ask Campos who was only shot in the leg before he began shooting.

On Monday, Clark County Sheriff Joe Lombardo said that Paddock shot Campos before his mass shooting — at 9:59 p.m. — and they now didn’t know why Paddock stopped his attack on the crowd.

According to the new report, as noted by the LA Times, Paddock, who had placed security cameras outside his room, shot Campos through the door of his suite, which was outfitted with a camera to survey the hallway, as was a room service cart parked outside. Police said Paddock fired 200 rounds into the hallway.

Officials are now telling us that 200 shots were fired—6 minutes before Paddock opened fire on the crowd. There were witnesses who knew where they came from, and yet still, it took them over an hour to get into Paddock’s room.

Police claimed they were originally not in a hurry to get into Paddock’s room because the security guard halted the shooting. But now, according to them, this is not true.

Had police actually responded to the numerous reports of gunfire inside the hotel room, before the massacre began, perhaps 58 people may still be alive.

Another glaring shift of narrative also happened on Monday when police changed their story about when Stephen Paddock got to Las Vegas.

For those who’ve been to Las Vegas, you know that it is a tightly run ship. If you walk anywhere inside or outside of these massive hotels, you know that your movement is being recorded on dozens of cameras and, perhaps, even under the watch of security personnel on the ground. Why then, with these major security and recording implementations in place, could police be wrong about when Paddock arrived at the hotel? Also, they could’ve simply confirmed this with the front desk.

In the press conference on Monday, after multiple other press conferences in which they claimed Paddock checked in on the 28th of September, police then changed the narrative again, this time, claiming Paddock actually check in on the 25th—three days earlier than they originally claimed.

What possible motive would police have for falsely claiming Paddock did not get to the room until the 28th, knowing full well that hotel records easily confirmed his arrival three days earlier? We cannot answer that question, we just know it happened.

To cover for his glaring inconsistencies in reporting and then changing the facts of the case, Lombardo then blamed the press.

“In [the press’s] zest for information, in my zest to ensure the public safety, in the calming their minds, some things are going to change. They are minute changes… [what was said before was] not completely inaccurate,” he said.

However, as was stated above, these are not some tiny changes that could’ve been overlooked. These are massive shifts in a narrative that raise serious concerns over what the public is being told in regards to the Vegas massacre.

In our coverage of this horrific tragedy, never has TFTP attempted to assert a motive, a falsehood, or any conspiracy theory. We have only asked questions. However, many people are opposed to asking these questions about the holes in the official story. This new information now shows that, if anything, we need to ask even more questions.