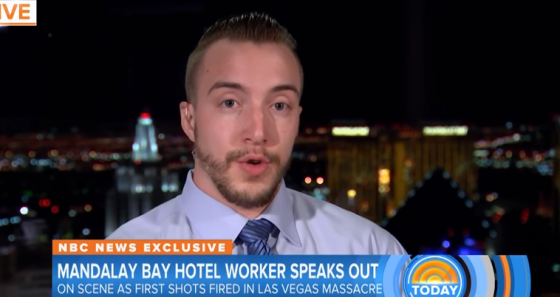 Stephen Schuck, a building engineer at the Mandalay Bay Hotel, was on the 32nd floor when the Las Vegas mass shooting began. He says that he had been called to check on an exit door and was walking down the hallway when he “started to hear shots ring out.”

In this video, Schuck shares his story with reporters from that horrifying night at the Mandalay Bay.

Schuck claims that he saw security guard Jesus Campos moments after the shooting had begun, not before. He also alleges that Campos told him to take cover as shots whizzed by him down the corridor of the hotel.

*This is the story that the Cook County Sheriff told us to believe about Campos.

He does say that he could see that Campos was shot in the leg, but the sheriff says that that shooting happened a full six minutes before the massacre. The reporter actually asks how Schuck remained so calm during his radio call for help. Schuck says that he just told himself to remain calm among the approximately 200 bullets that were flying by him in the hallway.

Schuck says that he’s refusing to let the mass shooting define him, and he’s intent on returning to work at the Mandalay Bay Hotel.

Listen to his story, and let us know what you think about the maintenance man’s harrowing ordeal.