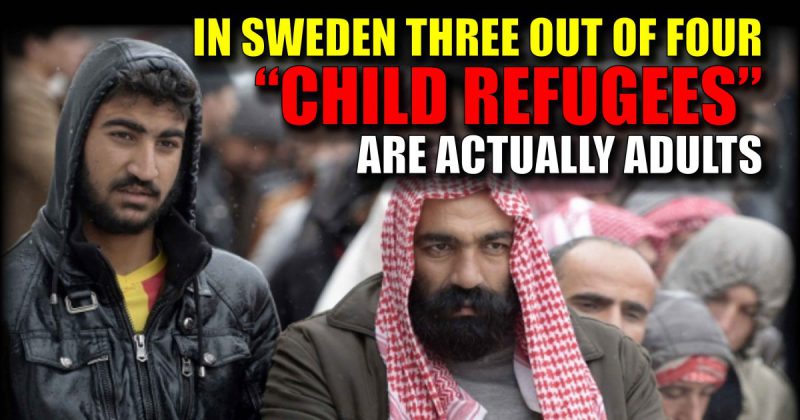 Samhällsnytt is a Swedish-language news site founded by Kent Ekeroth, 36, a member of Sweden’s parliament, the Rikstag, and a member of the Sweden Democrats — a nationalist, conservative political party.

Egor Putilov, a former Rikstag member and political asylum officer for the government’s Migration Board, reports for Samhällsnytt on Oct. 4, 2017 that a dental hygienist made the mistake of informing the Migration Board that the majority of “unaccompanied” child “migrants” in Sweden actually are adults. For that, he was fired from his job and his home is threatened with confiscation.

Bernt Herlitz, now 57, and his wife were trained to become dental hygienists in a three-year course of studies at Umeå University, after which both found employment at the Public Health Service in Visby, Sweden, where many so-called unaccompanied refugees seek dental care.

In July 2016, the couple attended a seminar in Almedalen on how an individual’s age can be assessed by his/her teeth. One of the seminar attendees was Åsa Carlander-Hemingway, a unit manager from the Swedish Migration Board, who told the couple that it is important that all suspicions about the age of “unaccompanied” refugees be reported to the Board.

Herlitz determined that most of the “unaccompanied” child refugees are actually adults. As he put it:

“I would probably appreciate that up to 80% of them were obviously adults. This can be seen, for example, from their wisdom teeth that are fully grown–something that is only seen in adults.“

So Herlitz did as his boss, unit manager Carlander-Hemingway, told him to do. In August, when he returned to work from the seminar, Herlitz advised the Migration Board about his suspicions. In a series of more than eight emails, he stated that he is a dental hygienist and that he believes the ages claimed by “unaccompanied” refugees are wrong. He also said that the wrong is compounded by allowing these adult pretend-child refugees live among real children.

Herlitz did not receive any response from the Swedish Migration Board. Instead, one of the Board officials forwarded his e-mail to Mats Kvarnberg, Herlitz’s superior at Folktandvården, Sweden’s county-level dental care.

“The manager asked me into a room where there was also another senior Migration Board manager from the region of Gotland. They told me I will not go to work tomorrow, that I’m suspended, and that there will be an investigation.”

Herlitz felt devastated, but did not realize the full seriousness of what had happened. He thought the investigation would take a few days, after which he would return to work.

Two weeks later, Herlitz was summarily fired after 10 years of service at Folktandvården. The reason given was that he had violated patient confidentiality.

Then the media persecution began.

All three local newspapers in Gotland described Herlitz as a “dangerous” “right-wing extremist” and a bigot against refugees. Herlitz said that SVT, the Swedish national public TV broadcaster that is funded by a television licence fee payable by all owners of television sets, “wrote about me on the first page without even contacting me. One feels so enormously exposed. Sure, they did not print my name, but Gotland is a small place and everyone knows everyone, so it’s not hard to figure out who it’s all about.”

Herlitz is neither right-wing nor even politically active. He is a native of Sweden and has lived all his life on the island. Prior to being a dental hygienist, he had worked to build mobile base stations at a factory acquired by Flextronics, which eventually closed the business in Visby in 2003 and moved production to Hungary.

Herlitz said, “Job is the most important thing. Everything revolves around it. If you have no job, you have no money, no spare time. I am 57 years old and that means it will be difficult for me to find new employment in the labor market.”

So he decided to fight to get his job back. But his trade union refused to help him because he had forgotten to renew his union dues a couple of months before, which means he has to pay for legal aid from his own pocket.

Herlitz tried to find a job on the mainland. He managed to find temporary work in Kalmar County, commuting by ferry from the island for three-day shifts. But the temporary job eventually ended. Meanwhile, his wife was demoted to half-time at the Public Health Service, and later resigned completely. Herlitz explains:

“She suffered from health problems because of this whole sad situation. It became impossible for her to work there. It also did not help that some colleagues started looking at her.”

Both husband and wife were jobless by the time Gotland’s district court reached a verdict after a long trial that lasted nearly a year. SVT sent a television team to follow the trial to report on the star prosecutor’s work. According to Herlitz, SVT seemed unaware of his history. He wrote to SVT, but never received an answer.

While the District Court ruled that while there was no reason for Herlitz’s dismissal, the employer had the right to terminate him, and that Herlitz had breached patient secrecy confidentiality, although no patient had actually suffered injury because of the breach.

Region Gotland would pay a small compensation to Herlitz of 35,000 kronor ($4,346), plus his salary for five months.

Then came the next shock: Region Gotland appealed the verdict to the national Labor Court in Stockholm. If the appeal is successful, Herlitz will have to pay the legal costs for both parties, which may amount to 1-1.5 million kronor ($124,184-$186,276).

Herlitz said that if he loses:

“It will be a death sentence for us, for the whole family – even for my five-year-old daughter. We do not have one million kronor, we are unemployed now. I will have to pay the legal fees for both parties within 30 days of the judgment, otherwise the Kronofogden will come. They will take our apartment, our car, all the furniture. I think it’s all so immoral. They [government] have unlimited resources, with our tax money. And they choose to marshall those resources to destroy me and my life.”

According to Samhällsnytt‘s sources, Maria Dalemar, Director of Health at Regional Gotland, was the head of the decision to dismiss Herlitz and pursue a legal process against him. When Samfällsnytt contacted her on the telephone, she explained that the decision to appeal the District Court’s verdict to the Labor Court was because Herlitz was terminated due to his breach of patient confidentiality. When asked if she understood the dire consequences for Herlitz and his family, Dalemar said, “I have no comments on that,” and ended the phone call.