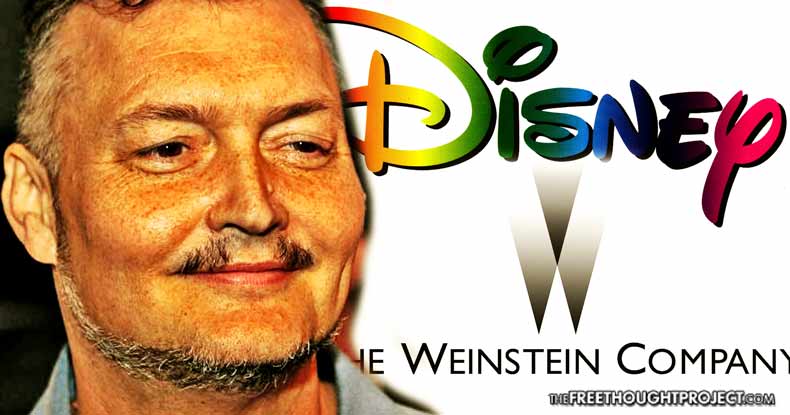 Pedophilia in Hollywood, according to victims and those who expose it, is rampant and exists throughout the industry. Those who expose it are often tarred and feathered in the mainstream and the predators in Hollywood remain protected. However, the recent revelations about the alleged sexual abuse doled out by Hollywood mogul, Harvey Weinstein, appears to be a chink in the pedophile protective armor enjoyed by Tinseltown.

After the NY Times piece exposed Harvey Weinstein for his rampant sexual harassment, actresses and actors came out to expose how they too have been abused in the industry. This massive coming out is forcing the mainstream media to finally cover the sexual abuse that goes on behind the scenes leaving a trail of damaged children and adults alike in its wake.

To highlight just how sick and depraved many of those in this industry are, shortly after Walt Disney Company bought Bob and Harvey Weinstein’s company in 1993, Disney hired a convicted child molester—who molested a young boy on a movie set—to direct the film Powder.

Becuase Disney acquired Miramax, they are now subject to potential lawsuits over the alleged abuse doled out by Weinstein since he stayed on with the firm until 2005.

“If, sometime between the years 1993 and 2005, when it owned Miramax, Disney was aware of Weinstein’s behavior, Disney was obligated to protect its employees, including young actresses like Gwyneth Paltrow and Rose McGowan, who claim to have been harassed, including Asia Argento who claims Weinstein raped her in 1997,” Breitbart’s John Nolte reported. “Outside of the ‘open secret,’ another issue that makes one wonder about Disney’s moral, ethical, and legal liability, is the settlements.”

“Unless Weinstein settled using his own money, which is unlikely, how could Disney not know about corporate money spent for sexual harassment settlements?”

In fact, in spite of the controversy, Salva has gone on to write and direct many more Hollywood movies since Powder, including the horror series Jeepers Creepers, which releases its third sequel this year.

As the Free Thought Project reported last year, childhood star turned adult actor Elijah Wood, also claimed Hollywood is in the midst of a massive sexual abuse scandal, which can be compared to that of Jimmy Savile in Britain.

Indeed, this control over the narrative is so strong, that Weinstein may indeed be a sacrificial lamb, cast out of the group as to divert attention away from these atrocities.

Rose McGowan, who worked with both Salva and Weinstein attempted to call attention to this problem on her Twitter account Wednesday, and for this, they suspended her account.

If this is their plan, we must not let them simply distract with one scapegoat or silence those who are calling them out, we need to keep pushing this issue and wake up more people to this elite group of people who prey on innocence.

It is also important to note that this problem is not just in Hollywood either. It is in Washington as well — up to and including the current Trump administration.

Please share this article with your friends and family so that they may see the dark nature of Hollywood’s elite.