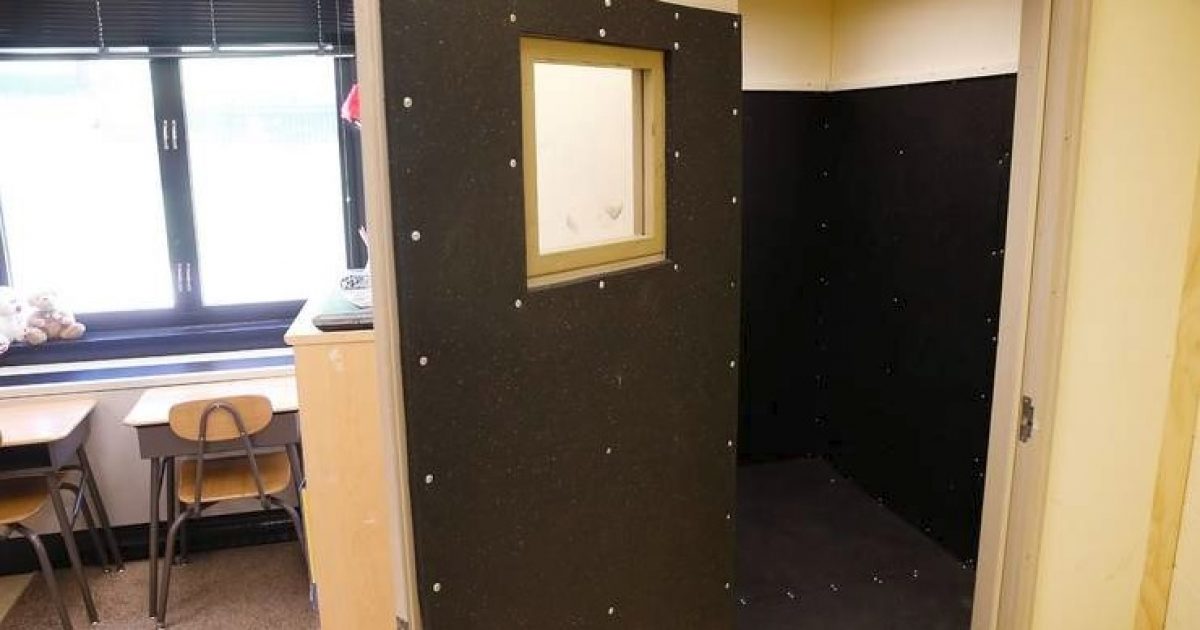 Now, here’s where I want to see if government applies its own standards to its public indoctrination centers.

Last week, I reported on Alan and Aimee Friz, Christian parents of 11 children, including the one she is pregnant with. They were both arrested because they cared about the safety of their family and their oldest daughter and locked her in a room at night after she made threats to murder them in their sleep.

While the Frizes simply loved and cared for their daughter, a lot more than the state would have done in the situation, they were ironically caged in a jail cell and their children taken from them.

Now, it’s come out to light that a public school in Iowa has been giving kids “time out” in a wooden cage for up to an hour! Check out the video.

Public schools in Iowa test a controversial type of discipline.

The 6×3 boxes are referred to as “seclusion enclosures” and they can only be opened from the outside.

They have padded walls and a window in the door.

One school board member referred to them as “little dungeons.”

The cages were implemented to confine students who are said to be “in danger of harming themselves and others.”

You might say, how can this be? Isn’t this some form of cruel and unusual punishment for small children? Of course, it is, but the state board of education has specific rules that keep this form of seclusion outside its ban of corporal punishment. I’ll bet they don’t allow paddling, which is what I got when I went to school.

According to the Iowa Department of Education:

Chapter 103 – Seclusion rooms must have adequate light and ventilation and a comfortable temperature. Staff needs permission to extend a child’s sentence for longer tahn an hour.

OK, so now that we have public indoctrination centers run like prison systems anyway, they are putting in isolation blocks, and calling the “corporal punishment” a “sentence.”

These people are treating kids like they are criminals rather than giving them proper discipline.

In addition to the Department of Education, the Cedar Rapids Gazette reported on the wooden cages back in July.

EDAR RAPIDS — The Cedar Rapids school district has admitted Pierce Elementary School staff held a third-grade girl in an unauthorized seclusion room not for being physically aggressive — as the law allows — but because she wouldn’t stop crying.

“If I did that, I absolutely would be reported to DHS,” said Tammy Mims, the girl’s guardian, referring to the Iowa Department of Human Services, which investigates reports of child abuse. “There’s no accountability.”

“I was crying, kicking the door and trying to pull it open,” the girl told The Gazette. “They said, ‘You need to calm down,’ but I couldn’t get out.”

She doesn’t know how long she was in the room — and the school district didn’t document the incident — but she said she finally was able to pull the door open a crack and saw several school staff on the other side.

The girl said she was placed in that room twice during third grade, although Mims said she did not receive written notice — as required by law — for either incident.

When I first saw this I wanted to write it off as a joke. The Huffington Post has run a lot of stuff I find dubious at best.

I watched the video partly because my kids go to school in Eastern Iowa, which is exactly where this form of “Discipline” was said to be taking place.

I personally was in shock.

I was stunned. Eastern Iowa and schools tend to lean liberal. How could liberals be for this? Was it really happening? I went to my personal Facebook page. The one where I post mostly only family photos and non-political things. I shared this video and asked if any of my friends new if this was real or not. I was half expecting it to be “Fake News”. Well, it wasn’t.

Of course, those in charge of these mini-prisons blame everything and everyone but their lack of ability to manage.

The Gazette reported, “Seclusion rooms, used in many Iowa school districts, are allowed as a last resort when agitated children are at risk of harming themselves or others. Although some psychologists and parents believe seclusion can do more harm than good, the practice reflects the challenges teachers face educating children with mental illness, developmental disabilities or trauma that may cause them to act out violently.”

“But the rooms aren’t to be used for minor infractions, and never for punishment,” the report added.

But they are being used for that. They’re even referring to it as a “sentence.”

In a review of the cages, an Iowa City Task Force said they wanted to keep them, but wanted to use them less. That’s code word for, we’re just engaging in damage control.

“It’s hard to understand why we need to lock up a 4- or 5-year-old in a 6-by-6 cell because we can’t calm them down,” board member Phil Hemingway said.

“These are little dungeons we have in the classroom,” board member Chris Liebig added. “I understand there’s a rationale you can build for them, but to me, it’s just not right. … It can’t look and feel the way that these do.”

So, in days gone by, public indoctrination centers used to paddle, or you might have to go to the principal’s office where they would probably call your parents and then you got spanked when you got home.

Not today. Today, people are happily dropping their children off at the local elementary prison facility.

Seriously, America, are you not awake to what is being done in this country?

Get your kids out of these places while you still can and start teaching them at home! You can do it! You can! And you can start for free by clicking here!