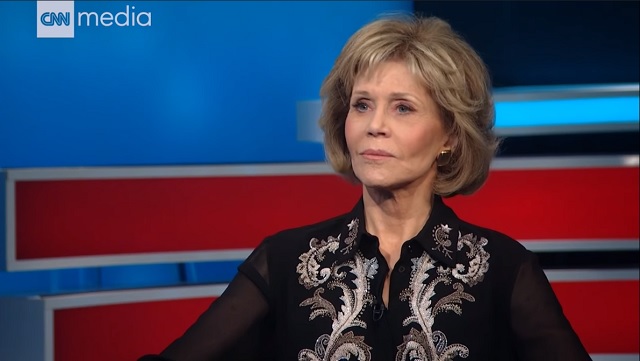 Asked why she didn’t speak out earlier, Fonda said, “because… it didn’t happen to me.”

Feminist actress Jane Fonda told CNN Thursday she’s “ashamed” she didn’t speak out about Harvey Weinstein despite knowing about his proclivities for a year, she then proceeded to blame “male entitlement” and Donald Trump for his actions.

“I found out about Harvey about a year ago and I’m ashamed that I didn’t say anything right then,” Fonda told CNN’s Christiane Amanpour.

“Why didn’t you, you’re so bold?” Amanpour responded.

Earlier in the interview, Fonda felt it was “her place” to blame males generally for Weinstein’s personal behavior.

“Let’s not think this is some unique, horrific– this goes on all the time,” Fonda said.

“It’s this male entitlement,” Fonda responded. “In Hollywood and everywhere! In offices and businesses all over the world, uh, in bars and restaurants and stores, women are assaulted abused and harassed…”

Asked to give an example of abuse she’s experienced, she cited a French movie director she claimed propositioned her for sex when she was in her twenties. She said she turned him down but “got the part” in his movie “anyway,” noting “he was very nice after that.”

Unable to contain herself, Fonda went on to blame Donald Trump for empowering men like Weinstein as he got elected “even though he was an abuser.”

“I mean, Donald Trump, we have a man who was president who does these things, and what kind of a message does that say? Unfortunately, that counteracts a lot of the good that we’re doing, because a lot of men see, well, our president does it, and a lot of people see that he got elected even though he was an abuser, so, I’m just gonna go ahead and do what I want to do. It’s unacceptable, and we can’t ever forget that, and we have to stand up to them,” she said, having just admitted she covered for Weinstein and happily went to work for a “very nice” French movie producer who abused her by propositioned her.

Fonda made no mention of the fact young boys and young men in Hollywood are suffering abuse far worse than anything Weinstein has been accused of.

I’m sure she’ll admit in a few years she was aware of such abuse, but she’ll defend herself by saying she didn’t speak out “because it didn’t happen to me.”