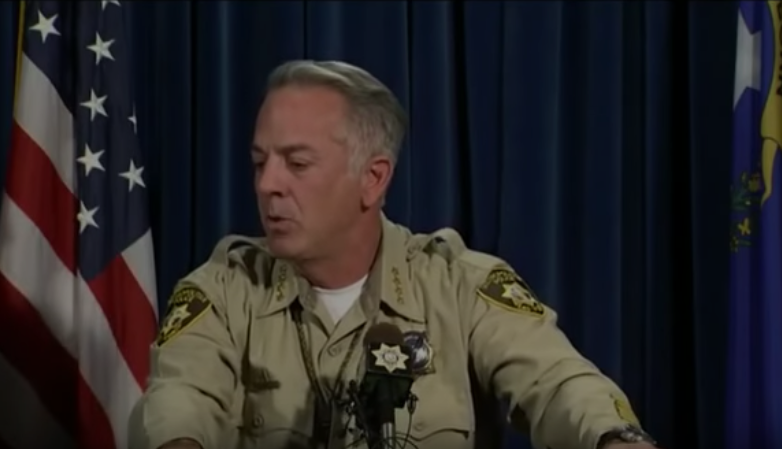 (INTELLIHUB) — Sheriff Joseph Lombardo of the Las Vegas Metropolitan Police Department appeared to be visibly shaken when told reporters Friday that he wasn’t attempting to be “subversive” in previous statements he made surrounding details of the October 1 massacre at the Route 91 Music Festival where 58 people lost their lives.

In the ‘no questions’ conference, which members of the independent media were not allowed to attend, the sheriff said that he’s “well aware” of the timeline dispute released by MGM Management on Thursday which claims that Stephen Paddock fired his weapon into the crowd just seconds after Mandalay Bay security guard Jesus Campos was struck by a bullet in the 32nd-floor hallway outside the shooter’s end suite.

The sheriff stuck to his guns on Friday when he told reporters that he still ‘stands by’ his latest timeline which lists Campos’s encounter with Paddock at 9:59 p.m., 6 minutes prior Paddock’s first known volley of fully-automatic gunfire.

The visibly nervous sheriff also made clear that “there is no conspiracy between the FBI, LVMPD, or the MGM” and that “nobody is attempting to hide anything” in reference to the investigation and noted his solidarity with the FBI.

“We are standing hand-in-hand with the FBI in the continuance of this investigation,” the sheriff explained. “I feel confident that there are no other individuals that are intending to cause harm to our community associated with the 1 October event.”

Sheriff Lombardo also provided an explanation for changes he recently made to the publicly released timeline surrounding Paddock’s arrival to Vegas and his check-in date at the Mandalay Bay.

“We have come to learn that the suspect did occupy the room on the 25th and the situation on how the room was compensated or paid for had changed on the 28th to include Marilou Danley,” he explained.

Additionally, the sheriff told reporters that so far there has only been a “visual inspection” done of Paddock’s brain and said that Paddock’s brain was shipped to a facility that will conduct a “microscopic analysis of the brain” to see if there were any signs of mental illness.

As of yet, authorities admit that they still have no motive for Paddock’s crimes and maintain that he has no affiliation with any groups.

At one point a reporter tried to sneak a question in but was quickly swatted down by Lombardo over the podium mic.