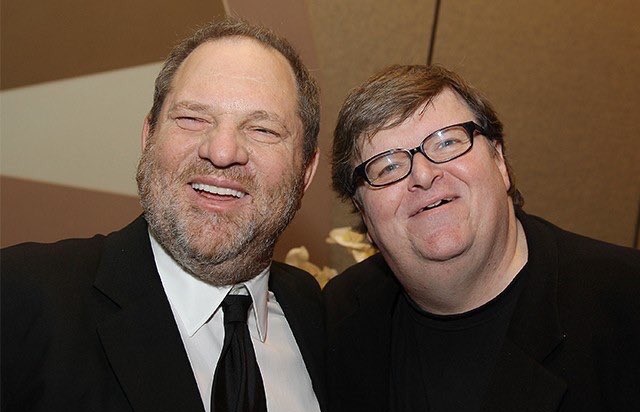 Even though Harvey Weinstein’s sexual proclivities were an open secret for three decades, Michael Moore had no problem working closely with him for years.

The two best buds teamed up earlier this year on a new anti-Trump documentary titled “Fahrenheit 11/9,” which is a sequel to Moore’s 2004 documentary “Fahrenheit 9/11,” which was also produced by Bob and Harvey Weinstein when they were at Miramax. “Actually Harvey Weinstein is one of the best people to work with in this town #funfactneverreported,” Moore tweeted just two years ago.

After Weinstein’s proclivities were exposed by the the New York Times and Ronan Farrow at The New Yorker, Moore stayed silent for eight days. He refused to give a comment to The Guardian when asked earlier this week.

On Friday, rather than issue an apology, Moore claimed ignorance and attempted to deflect any personal responsibility with a lengthy Facebook post saying the moment should be seized to bring down “white male hierarchy.”

USE THIS MOMENT TO CREATE A WORLD WITHOUT HARVEYS

Anyone with a flicker of a conscience or a modicum of decency stands, as I do, with the women who’ve summoned the courage to tell the truth about Harvey Weinstein.

But well-meaning platitudes of support for the abused are simply not enough.

Why do we live in a society where men do not intervene when they witness the mistreatment of women? I have intervened on more than one occasion and I have fired men who sexually harass women. Harvey Weinstein knew better than to behave inappropriately toward women in my presence. I’m guessing successful sociopaths like him who get away with it for years are very, very careful not to let the kind of men who would stop them dead cold ever get a glimpse of who they really are. I don’t live in Weinstein’s Hollywood world and I make documentaries, so I can’t speak to the culture he created and seemed to thrive in. I AM the only director that I know of who’s actually taken Weinstein to court (for being a thief, which requires a different set of sociopathic skills, but, like sexual harassment, you can probably find them at a few Hollywood studios).

Moore took Weinstein to court in 2012 to get slightly more money out of Fahrenheit 9/11. He partnered with Weinstein happily again literally earlier this year, two years after Weinstein’s face was plastered over New York newspapers for allegedly groping model Ambra Battilana Gutierrez.

There is no way in hell Moore didn’t know what Weinstein was up to.

It’s unreal what a liar this man is, yet the liberal media is hailing him as a hero for this idiotic rant.

Moore goes on to blame “all men,” which he later specifies means “white men,” for Weinstein’s personal behavior:

The New York Times investigation into the repugnant and abhorrent behavior of Harvey Weinstein (and the Weinstein Company) is a profound cultural/social/political moment that I believe could actually ignite a historic change in our society. What if we seized this moment and bring down, once and for all, the white male hierarchy which has ruled our way of life in America since the first boatload of religious zealots arrived on Plymouth Rock?

And what if Hollywood commits, right now, to dismantling its rampant sexism and inequality, starting with appointing more female executives and letting more than 4% — yes, it’s actually only 4% — of all its films be directed by women?

What if we put the fox in charge of guarding the hen house? How stupid are liberals to actually buy this crap?

Let’s use this moment to end the abuse of women in our industry. Let’s make this a call for men to take a stand against the men who perpetrate this corrosive, criminal behavior, to call them out and shut them down. We can do this. All it takes is the will and the decision to say “enough is enough!”

Let’s change the subject from us covering up this man’s abuses for three decades and focus on pushing the anti-white male agenda we’ve been pursuing for years (with Harvey Weinstein’s funding and backing)!

I have four suggestions that Hollywood (and our greater society) should act on immediately:

1. Put all abusers on notice NOW: You know who you are, and scores of your employees, past and present, know who you are. You need to step down before they bring you down. There is nowhere left to hide. Your years of attacking and intimidating women are over. You have only two options: 1) Resign now, or 2) face an army of women and men who are going to take you out of power. You have seen this week what has happened to the most powerful, most well-known executive in Hollywood. You’re next. Turn yourself in, or go far, far away to a place where you can no longer harm more women.

2. To those abusers who ignore the above warning and choose to stay in power because you think that this is all going to die down and blow over — and that you are going to get to continue to get away with your behavior — let me explain to you in clearer language how this is all going to end for you:

Every one of your employees is now a documentary filmmaker. Thanks to the invention of the smartphone that has a built-in camera and voice recorder, every single one of your workers now carries in their pocket the ability to secretly record or film you and your harassment. And they will. They will post your crimes. You will be exposed, publicly shamed and hopefully removed. Avoid this cruel end by resigning now. 3. To the men who do treat women as equals and behave toward them with respect and dignity: This is your moment! Confront the abusive men at work. When you see something, you must say something. No more ignoring and turning away when you see women being harassed and intimidated in the workplace. This is on us. MEN, step forward, NOW!

4. The boards of directors of the Hollywood studios — and all across corporate America — must declare gender parity the new priority. Fifty-percent of all boards must be female. Hiring multiple female executives is the mandate. Of the top 100 grossing films each year, an average of only TWO are directed by women! All studios must commit to greenlighting more films by women (and, needless to say, by African Americans and other neglected groups).

This is all pure misdirection to avoid the fact he’s BFFs with Weinstein and knew exactly what he was doing. I sincerely hope Weinstein spills his guts and points out what hypocrites all these lying Hollywood hacks who are feigning ignorance and throwing him under the bus are.

These are short term actions that can happen now. But I want to point out that there is also a fundamental fix that MUST occur in the long run if there is ever to be any real change. We must reform our broken economic system and transform it into one that is equitable and democratic, one where the gap between rich and poor is ELIMINATED so that no longer do a few wealthy men hold the power.

We need to create a new economy where women and men have the same opportunities and are paid the same, an economy that no longer condemns generations to poverty and where their only option is to serve at the pleasure and the whim of the rich. We need businesses and workplaces that are owned and operated by their employees in a country where democracy is not just a word we mouth but an actual way of living — at work, at school, in our neighborhoods and in our daily lives. A democratic economy is a must if we are ever going to be able to deny white men their major weapon of abuse — the fear of financial insecurity — that they have used against women for eons.This is our mission for the long haul, the big picture that must be addressed and changed. We must ALL commit to doing this. I believe our collective conscience will ultimately settle for nothing less, and the result will be a better world.

Notice how he doesn’t even mention his active partnership with Weinstein?

Instead, he says “white men” are to blame for Hollywood producer Harvey Weinstein’s alleged serial sexual abuses, and the only solution is to take away “white men’s” power and bring in communism.

Of course, the fake news media ran with Moore’s bulls**t with little to no scrutiny.