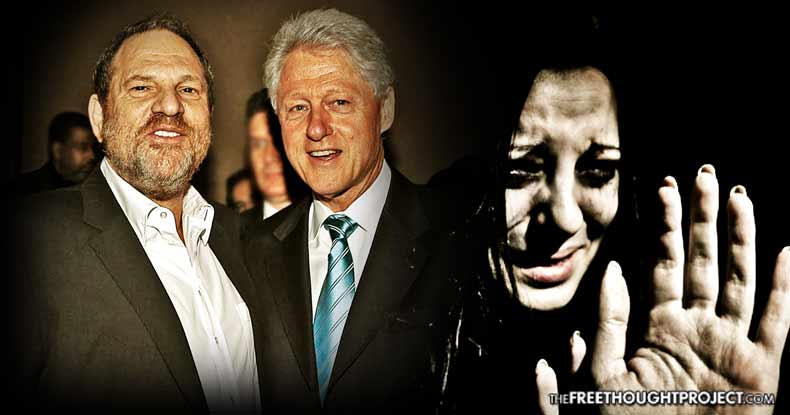 When Bill Clinton was at the height of the Monica Lewinsky sex scandal, Hollywood was by his side, offering donations for his legal fees, and one significant donor was a man who is now going through his own sex scandal—Harvey Weinstein.

More than 20 women have publicly accused Weinstein of sexual harassment, sexual assault or rape. After the New York Times and the New Yorker published in-depth stories detailing the testimonies of women who have been abused by Weinstein—and in many cases, paid off with airtight non-disclosure agreements—the stories have continued to come to light.

Former President Bill Clinton is no stranger to sex scandals. The scandal that received the most media attention came about in the late 1990s after former Arkansas state employee Paul Jones filed a civil lawsuit against him for sexual harassment when he was the state’s governor. During the discovery phase of the case, in which Jones’ legal team was searching for Clinton’s inappropriate relationships, the name of a White House intern surfaced: Monica Lewinsky.

In August 1998, a report from the Washington Post noted that Clinton was being accused of perjury and obstruction of justice regarding his testimony about his conduct with Lewinsky. At the same time, influential members of Hollywood were coming to Clinton’s defense.

The report noted that according to Clinton’s legal defense fund, a total of more than $2.2 million was raised in six months, which was notably more than was collected in funding during the previous four years of his presidency—combined.

“Hollywood was quick to come to the president’s aid. Among the 62 donors giving the maximum $10,000 were performers and directors such as Tom Hanks, Barbra Streisand, Michael Douglas, Ron Howard, Norman Lear, Steven Spielberg and Kate Capshaw-Spielberg as well as studio executives Jeffrey Katzenberg, David Geffen, Harvey Weinstein and Bud Yorkin.”

The fact that more than 60 members of the Hollywood elite were willing to donate both thousands of dollars and their public support to Bill Clinton is notable because the stories of Paula Jones and Monica Lewinsky were not his only accusations of rape, sexual harassment or inappropriate relationships with his employees.

Jones returned to the spotlight in October 2016, when she arrived at a press conference with then-Republican presidential nominee Donald Trump, and along with two other women who have accused Bill Clinton of sexual assault.

Clinton’s name was also linked to sexual predator and wealthy Wall Street hedge fund manager Jeffrey Epstein. Epstein spent just 13 months in prison and home detention for conviction of solicitation and procurement of minors for prostitution. That sentence is absolutely ludicrous, considering the fact that he was found sex-trafficking girls as young as 12 years old to facilitate rape parties with his wealthy friends on a private island.

Epstein’s private jet, which transported his friends to Little St. James Island, was nicknamed “Lolita Express.” Initial records claimed that Bill Clinton was listed as a passenger on the jet at least 11 times between 2001 and 2003. That number was then changed to more than double with 26 trips, showing that Clinton flew on the plane at least once a month during the two-year period.

Harvey Weinstein was a big-time Hollywood producer, a major Democratic donor and a notable close friend of the Clintons. While it is not clearly whether Weinstein was one of the wealthy men who also was connected to Epstein and used his access to rape underage girls, it is clear that there seems to be a trend among ultra-wealthy sexual predators where they lend money to one another when they are caught.

Hillary Clinton waited nearly a week to release a statement on the scandal, and when she did, she focused more on standing up for the victims than on condemning the criminal actions of her close friend. Bill Clinton has yet to make a statement, which raises questions about whether he is concerned that an investigation into Weinstein’s past could bring even more of the Clintons’ dirty laundry to light.