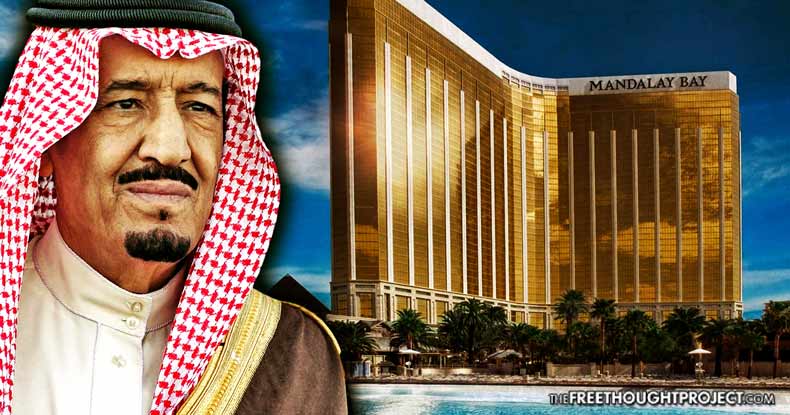 Two weeks after the Las Vegas shooting, Americans are still searching for answers as to what happened on that tragic night. In the midst of a range of theories, the internet noted the proximity between a U.S. ally’s government during both this terrorist attack and the 9/11 attacks.

Saudi Arabia is considered a close United States ally, despite an extensive record of human rights abuses. Since 2007, Saudi’s Kingdom Holding Company has owned 45 percent of the stock in the Four Seasons Hotels and Resorts. Another 45 percent of the stock is owned by Cascade Investment Management, a company controlled by Bill Gates. In 2010, KHC and Cascade worked together to make the Four Seasons private.

In Las Vegas, the top six floors of the Mandalay Bay Hotel are owned by the Four Seasons. This hotel became the subject of a deadly terror attack when suspect Stephen Paddock reportedly opened fire out of the windows of his suite on the 32nd floor, sending a spree of bullets down to a crowd of around 22,000 people at a music festival across the street.

While it may have been pure coincidence that a man intent on carrying out a massacre, happened to rent a hotel room near a floor owned by the Saudi Royal Family, there is one important factor: When the Saudi Air Force visited Las Vegas recently, they did not stay at Mandalay Bay—the hotel in which they own 45 percent of the top six floors.

The Las Vegas Review-Journal reported that a “Middle East Air Force” booked the entire W Las Vegas hotel for the month of August, and sources noted that it was the Royal Saudi Air Force. This raises the question of why the members did not stay at the Four Seasons at Mandalay Bay, when half of the stock is owned by the kingdom, and it is typically their location of choice.

It has been two weeks since the Las Vegas shooting occurred, and there are still a number of questions surrounding how Paddock was able to carry out the attack in the way the FBI claims. Within hours of the shootings, the official narrative was that Paddock was a “lone wolf” terrorist—despite several witness accounts of multiple shooters.

The surveillance footage, which surely exists as Paddock was staying at a hotel in Las Vegas, has still not been released, and evidence has yet to be presented showing that he worked alone in transferring dozens of rifles, thousands of rounds of ammunition and other supplies up to his hotel room.

There remains the question of whether Paddock, who was described by his brother as the opposite of a “gun guy,” had help in obtaining the arsenal of weapons, or in carrying out the attack.

WikiLeaks Founder Julian Assange suggested that the FBI could be involved, and he noted that the FBI’s business model is to stage terror plots so their agents can swoop in and save the day by foiling the plot they created.

The question of whether Saudi Arabia could be involved stems from President Trump’s leniency towards the U.S. ally, and from the questions of Saudi Kingdom involvement that arose after 9/11.

As The Free Thought Project reported, in July, a federal judge in Miami reversed her decision to push for the release of crucial documents revealing information on the funding of the 9/11 attacks. The information, which stemmed from a 2002 FBI report, is said to have included evidence of “many connections” between the Saudi family and “individuals associated with the terrorist attacks on 9/11/2001.”

It was also revealed last year, after the infamous 28-pages were declassified, that the Saudi government aided the 9/11 terrorists.

The fact is that no matter what theories turn out to be true regarding the Las Vegas shooting, police have begun making massive reversals in the original narrative that was initially given, and with each crucial detail that is changed, it serves as a reminder that this case is not yet closed, and Americans have the right to push for the truth to come to light.