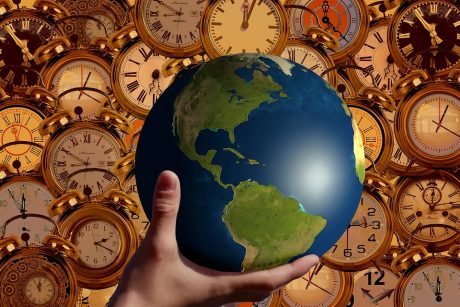 Throughout human history, those in the ruling class have found various ways to force those under them to work for their economic benefit.  But in our day and age, we are willingly enslaving ourselves.  The borrower is the servant of the lender, and there has never been more debt in our world than there is right now.  According to the Institute of International Finance, global debt has hit the 217 trillion dollar mark, although other estimates would put this number far higher.  Of course everyone knows that our planet is drowning in debt, but most people never stop to consider who owns all of this debt.  This unprecedented debt bubble represents that greatest transfer of wealth in human history, and those that are being enriched are the extremely wealthy elitists at the very, very top of the food chain.

Did you know that 8 men now have as much wealth as the poorest 3.6 billion people living on the planet combined?

Every year, the gap between the planet’s ultra-wealthy and the poor just becomes greater and greater.  This is something that I have written about frequently, and the “financialization” of the global economy is playing a major role in this trend.

The entire global financial system is based on debt, and this debt-based system endlessly funnels the wealth of the world to the very, very top of the pyramid.

“Compound interest is the eighth wonder of the world. He who understands it, earns it … he who doesn’t … pays it.”

Whether he actually made that statement or not, the reality of the matter is that it is quite true.  By getting all of the rest of us deep into debt, the elite can just sit back and slowly but surely become even wealthier over time.  Meanwhile, as the rest of us work endless hours to “pay our bills”, the truth is that we are spending our best years working to enrich someone else.

Much has been written about the men and women that control the world.  Whether you wish to call them “the elite”, “the establishment” or “the globalists”, the truth is that most of us understand who they are.  And how they control all of us is not some sort of giant conspiracy.  Ultimately, it is actually very simple.  Money is a form of social control, and by getting the rest of us into as much debt as possible they are able to get all of us to work for their economic benefit.

It starts at a very early age.  We greatly encourage our young people to go to college, and we tell them to not even worry about what it will cost.  We assure them that there will be great jobs available for them once they finish school and that they will have no problem paying off the student loans that they will accumulate.

Well, over the past 10 years student loan debt in the United States “has grown 250 percent” and is now sitting at an absolutely staggering grand total of 1.4 trillion dollars.  Millions of our young people are already entering the “real world” financially crippled, and many of them will literally spend decades paying off those debts.

But that is just the beginning.

In order to get around in our society, virtually all of us need at least one vehicle, and auto loans are very easy to get these days.  I remember when auto loans were only made for four or five years at the most, but in 2017 it is quite common to find loans on new vehicles that stretch out for six or seven years.

The total amount of auto loan debt in the United States has now surpassed a trillion dollars, and this very dangerous bubble just continues to grow.

If you want to own a home, that is going to mean even more debt.  In the old days, mortgages were commonly 10 years in length, but now 30 years is the standard.

By the way, do you know where the term “mortgage” originally comes from?

If you go all the way back to the Latin, it actually means “death pledge”.

And now that most mortgages are for 30 years, many will continue making payments until they literally drop dead.

Sadly, most Americans don’t even realize how much they are enriching those that are holding their mortgages.  For example, if you have a 30 year mortgage on a $300,000 home at 3.92 percent, you will end up making total payments of $510,640.

Credit card debt is even more insidious.  Interest rates on credit card debt are often in the high double digits, and some consumers actually end up paying back several times as much as they originally borrowed.

According to the Federal Reserve, total credit card debt in the United States has also now surpassed the trillion dollar mark, and we are about to enter the time of year when Americans use their credit cards the most frequently.

As borrowers, we are servants of the lenders, and most of us don’t even consciously understand what has been done to us.

In Part I, I have focused on individual debt obligations, but tomorrow in Part II I am going to talk about how the elite use government debt to corporately enslave us.  All over the planet, national governments are drowning in debt, and this didn’t happen by accident.  The elite love to get governments into debt because it is a way to systematically transfer tremendous amounts of wealth from our pockets to their pockets.  This year alone, the U.S. government will pay somewhere around half a trillion dollars just in interest on the national debt.  That represents a whole lot of tax dollars that we aren’t getting any benefit from, and those on the receiving end are just becoming wealthier and wealthier.

In Part II we will also talk about how our debt-based system is literally designed to create a government debt spiral.  Once you understand this, the way that you view potential solutions completely changes.  If we ever want to get government debt “under control”, we have got to do away with this current system that was intended to enslave us by those that created it.

We spend so much time on the symptoms, but if we ever want permanent solutions we need to start addressing the root causes of our problems.  Debt is a tool of enslavement, and the fact that humanity is now more than 200 trillion dollars in debt should deeply alarm all of us.