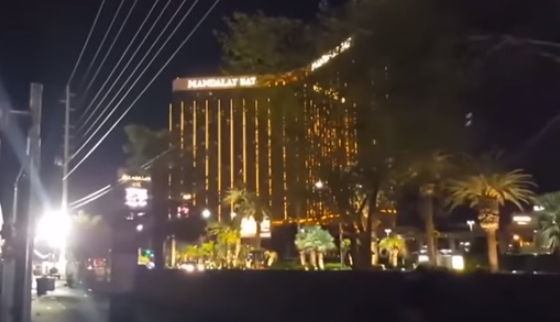 In an investigation where each day seemingly gets weirder than the last, the latest shocking revelation in the ongoing cover-up of what actually happened during the Las Vegas Massacre comes in the form of video footage that may prove that victims of the attack were fired upon from the air.

Multiple videos posted from the scene of the attack show a helicopter flying around the area which many have speculated could have been used for surveillance or dispatched by police after the shooting began.

Astonishingly, new footage has emerged that may show muzzle flashes coming from the helicopter in what looks to be evidence that a team was firing into the crowd from the air on that fateful night.

Despite claims by some that these are “strobes” it remains unlikely that this is the case, especially when you consider other footage of the helicopter taken on the night as well as research by a group of investigators who believe the first attack on October 1st was carried out from the air.

Notice how the shooting seems to stop immediately after the helicopter goes behind the hotel?

The following two videos look into the possibility that this was a coordinated air attack:

At the very least the above evidence deserves further attention. Consider the fact that we already have 100% proof that authorities have openly lied about what happened during the massacre.

Who is to say the entire official story isn’t complete disinformation?