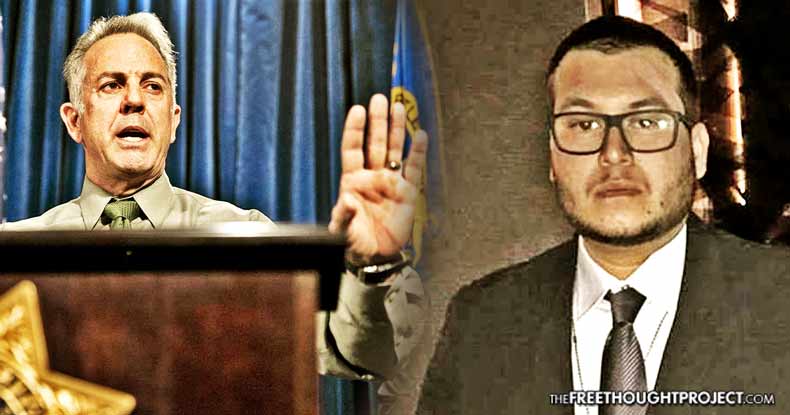 Las Vegas, NV — (RT) Jesus Campos, the Mandalay Bay security guard shot by gunman Stephen Paddock – who opened fire on thousands of concertgoers in Las Vegas – has reportedly vanished moments before he was scheduled to speak to the press.

Campos was booked for five interviews Thursday night, all of which were mysteriously canceled. As of Friday, his whereabouts are reportedly unknown.

ABC News journalist Stephanie Wash, who was present to interview Campos on Thursday night, tweeted that the guard had left before their interview.

“We were in a room & we came out & he was gone,” Wash tweeted late on Thursday, quoting David Hickey, president of the International Union, Security, Police and Fire Professionals of America, which represents Campos.

Jesus Campos was set to do 5 intvs tonight per union president, but they’ve lost contact. “We were in a room & we came out & he was gone”

Campos was also scheduled to appear on Fox News, but Sean Hannity confirmed that Campos had “canceled.”

When investigative reporter Laura Loomer went to Campos’ house after it was reported that he canceled his interview with Hannity, she filmed a Periscope of a woman at the door, who told her that she was not allowed to talk.

Loomer was met with armed security officers, who told her to leave the property.

“What I want to know is: who is preventing the family from talking? We have confirmation right now that there is a gag order on the family of Jesus Campos. If Jesus Campos is truly a hero, there is no reason he or his family wouldn’t be allowed to talk about what he saw and what he did,” Loomer said, according to Got News.

The reporter was also banned from attending a press conference held by the Las Vegas Metropolitan Police Department (LVMPD).

At the press conference, Clark County Sheriff Joseph Lombardo revised the timeline of events for the October 1 shooting for the second time.

Initially, police said that Campos arrived at Paddock’s door while the shooting was underway and diverted some of the gunfire away from concertgoers.

Campos was dispatched to the 32nd floor after a door alarm alerted the security team to an open door near Paddock’s suite. When he went to investigate, he came under fire and was struck in the leg. He retreated and notified his dispatcher about the shooter.The police changed their timeline last week when Lombardo announced that Campos had arrived six minutes before Paddock began firing into the crowd, leading many to question why police waited so long to respond.

On Thursday, MGM Resorts International, which owns the Mandalay Bay, released a statement to “correct some of the misinformation that has been reported.”

In their statement, MGM said that the 21:59 time offered by Lombardo was inaccurate because it was “derived from a Mandalay Bay report manually created after the fact without the benefit of information we now have.”

Through their investigation, police have determined that Campos encountered a “barricaded door, adjacent to the suspect’s door at approximately 21:59.”

In order to reach the 32nd floor, Campos was required to descend to another level to make it to the door to which he was originally dispatched. After reaching the door, Campos was shot “in close proximity” to 22:05, Lombardo said.

The police still claim that Paddock began firing into the crowd at 22:05.

Lombardo said that the current timeline was confirmed through records from a call that Campos made on his cell phone after he was shot. He also said that police confirmed the timeline through security logs, Officer Campos himself, the LVMPD dispatch, interviews, body-worn cameras, hotel cameras, and private cameras.

“So the timeline associated to both of those sources have been verified,” Lombardo said.

“22:05, the number that was provided earlier in reference to the majority of fire, upon our community we still stand by that time and that was done by the combination of sources that I listed for you earlier,”Lombardo added.

The sheriff said officers arrived at Paddock’s suite at 22:17, around 12 minutes after the shooting began. He said that Paddock fired on the crowd for 10 minutes, and by the time police had arrived, the firing had ceased.

Lombardo added that investigators have spent “a great deal” of their time “preoccupied” on the timeline. He denied that there was any “conspiracy” between the FBI, LVMPD and MGM, adding that no one was “attempting to hide anything in reference to this investigation.”

“The dynamics and the size of this investigation requires us to go through voluminous amounts of information in order to draw an accurate picture. My attempt, like I stated earlier, is to give you that information, as I know it, unverified, to calm the public, not to establish a legal case,” Lombardo said, refusing to take questions from reporters.

He added that some of the information that he gave reporters on Friday might also change.

Lombardo also updated the number of victims injured in the shooting to 546. Of those victims, he said 501 have been discharged, meaning they were treated for their wounds and subsequently left the hospital. There are still 45 victims currently hospitalized.

The number of fatalities still stands at 59, including Paddock, Lombardo said, but added that this figure may rise.