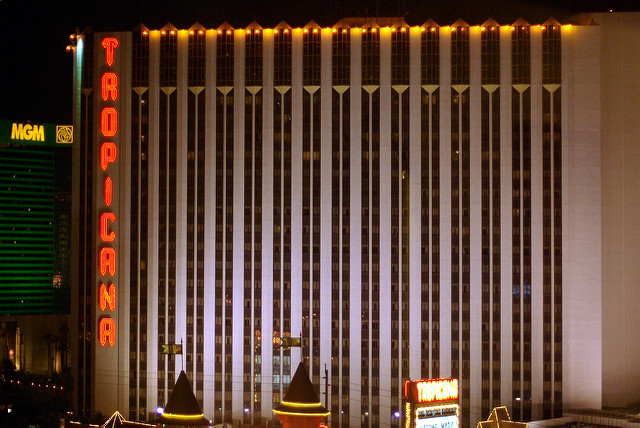 A young man and his girlfriend who got caught up in the Oct. 1 Las Vegas shooting describe how people were shot and shots were fired at the Tropicana that night

LAS VEGAS (INTELLIHUB) — An eyewitness named Geo Rios and his girlfriend were attending the Route 91 Harvest Music Festival on the night of Oct. 1 when gunfire rang out striking numerous people inside the venue.

Rios said that you could actually hear the bullets hitting bodies all around them and said that several people who were struck fell atop his girlfriend.

“[…] as we’re hearing that we all dropped,” the eyewitness explained. ‘There were people getting shot all around us. Everywhere around us. It was very, very, scary.’

“One second we were listening to Jason Aldean […] the next moment we are fighting for our lives.”

Geos said that he and his girlfriend were physically exerted just trying to make it out of the venue and explained how ‘it was a real workout’ to keep dropping down to take cover and then get back up again.

“[…] you have no idea, it drained us,” he said. “It literally drained every little part of us that we could possibly have. […] it took all of what was in us.”

Geos described their escape from the venue in detail and made clear that he and his girlfriend chose the path and the exit with the least amount of people at it in order to maximize their chances of survival.

“We ran straight to the back of the venue and there was like a ten-foot fence,” he explained. That’s when Geos and his girlfriend climbed up and over the fence using a piece of an “orange gate” as a makeshift ladder. Geos said that they couldn’t climb the fence without the makeshift ladder because the fence was covered with a “green material” that wouldn’t allow you to grab it.

“Two guys that were standing on the other side of the fence were catching everybody,” he said. “One of the caught my girlfriend.”

“Everyone who lived is a hero, from that event, and I want to make that clear. […] There was a lot of beautiful things going on. A lot of people taking care of each other,” he said.

Once the couple was over the fence Geos said that he could hear ‘shots coming from Hooters, the MGM area’ in addition to the shots coming from Mandalay Bay. This is the very same area other eyewitnesses also heard shots being fired!

Geos said that he and his girlfriend eventually made it to the Tropicana where people were entering the building ‘with their hands up.’

“Everybody is walking through and it’s a hallway,” he said. “There were just hoards of people funneling into this room. […] There’s blood on the walls. You can see handprints on the doors, I mean, there was blood everywhere.”

Astonishingly, Geos’s report dovetails with police audio which was captured the night of the shooting where medics reported that they were ‘taking fire outside the Tropicana’around 11:40 p.m.

‘I wanted to know what was in the suitcase,’ Geos explained. ‘Something was wrong and I didn’t like it. I felt like it was a planned setup and so I confronted him.’

“I mean this guy, how could you be so calm when everybody is running through, people, blood everywhere,” he questioned. “There was a guy down on the ground next to the wall bleeding and he was dead, my girlfriend saw him. […] This guy was on the ground he had shots to his legs, shots on his torso […] and he was shot in the arm. […] he was dead. He already had his head back and his eyes were closed, he wasn’t moving.”

That’s when Geos said the guy looked him in the eyes the entire time as he bent down to open the case. However, at that precise moment, Geos said that ‘shots rang out’ right there either inside or just outside of the Tropicana.

“[The shots sounded] totally different. There were ARs and they were suppressed,” he added. ‘It was three bursts inside the Tropicana inside the casino. People who were there will tell you that that happened and it was confirmed via those people who were in there.”

Geos said that the guy with the suitcase ran into the casino once shots were fired.

“And yes I do believe that if he would have opened up the suitcase that he was just ready to shoot me down,” he said.

That’s when Geos and his girlfriend exited the building and ran down an alleyway located near the west side of Tropicana’s property where they proceeded to hide in an industrial dumpster for the next three hours. However, upon entering the dumpster the two heard shots and saw ‘muzzle flash’ coming from the ‘Excaliber/New York New York area which again matches up with police audio and reports of ‘shots fired at New York New York.’