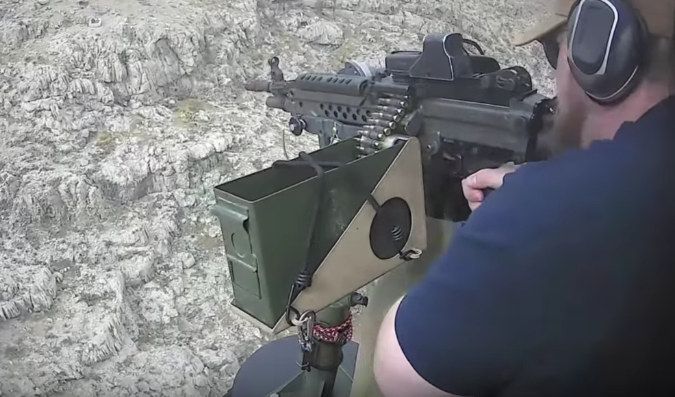 LAS VEGAS (INTELLIHUB) — Several videos making their rounds on the Innerweb claim to reveal that a helicopter gunship stormed the city on the night of Oct. 1 while an aerial gunner fired onto innocent civilians attending the Route 91 music festival.

Interestingly enough, after reviewing several of the videos, which I will present herein this article, I believe that such a theory could potentially be viable and could explain what Sheriff Joseph Lombardo and the FBI have been covering up along with some of the other strange anomalies which have yet to be explained. I am not saying this ‘for sure’ happened. I am merely presenting a few interesting videos in an effort to open up a real-time dialogue and investigation into the matter in which readers can leave any information they may have in the comments section along with their thoughts.

To understand the ‘helicopter gunner theory’ you must first take a good look at all of the evidence presented in this article and keep an open mind.

Could the attack have been a lot worse than authorities are admitting?

In the first video, you will have to replay it over and over. Watch and listen carefully. This video will open your mind up to the theory.

The second video proves that the theory is entirely possible. The 14-second clip shows what appears to be heavily armed men with belt-fed weapons gearing up for one of two things — either an aerial assault or an ariel interception of the shooter. They plan to take off in the helicopter that just landed! But the question is; were they loading up before or after the shooting took place? Who were these men? What agency is the helicopter in the background registered to?

The next video surrounding the ‘helicopter gunner theory’ shows what appears to be muzzle flash emitting from a helicopter which appears to be firing toward the Excaliber.

In the following video, you can clearly see a helicopter which appears to be emitting a muzzle flash while it’s circling around the backside of Mandalay Bay. Interestingly enough, as pointed out by OG Youtuber “Monagraph,” the sound of the gunshots dissipate as the helicopter disappears behind the Mandalay Bay! This is an amazing detail!

To show you just how plausible it would be to fire a machine gun from a helicopter we have to look no further than a local company named “Machine Guns Vegas” which allows tourists visiting Las Vegas to fire a mounted box-fed M239 SAW machine gun equipped with shell catchers out the side door of a helicopter! What a rush. Take a look for yourself. Prices start at $2,999.00.

Keep in mind, that an M239 SAW is what Intellihub has already confirmed as one of the weapons being fired that night.

Here is a video of the company in action.

It’s possible that a helicopter and gunner were hovering just above the taxi driver who was parked at Mandalay Bay and later made a loop. This could also explain the muzzle flash in the taxicab’s mirror which people thought was a shooter at ground-level. The muzzle flash could have been reflecting off of a shiny surface from above!

Could the helicopter have been that close to the taxi?

Could Stephen Paddock have been set up? A patsy?

It’s a scenario straight out of the (1987) film The Running Man, in which the mainstream media labeled a character played by Arnold Schwarzenegger “the butcher of Bakersfield” despite the fact that the character didn’t commit the alleged crime. Ironically, the setting for the film was written to take place in the year 2019, which would only be two years from now.

A description of the film posted online reads:

In the year 2019, America is a totalitarian state where the favorite television program is ”The Running Man” — a game show in which prisoners must run to freedom to avoid a brutal death. Having been made a scapegoat by the government, an imprisoned Ben Richards (Arnold Schwarzenegger) has the opportunity to make it back to the outside again by being a contestant on the deadly show, although the twisted host, Damon Killian (Richard Dawson), has no intention of letting him escape.