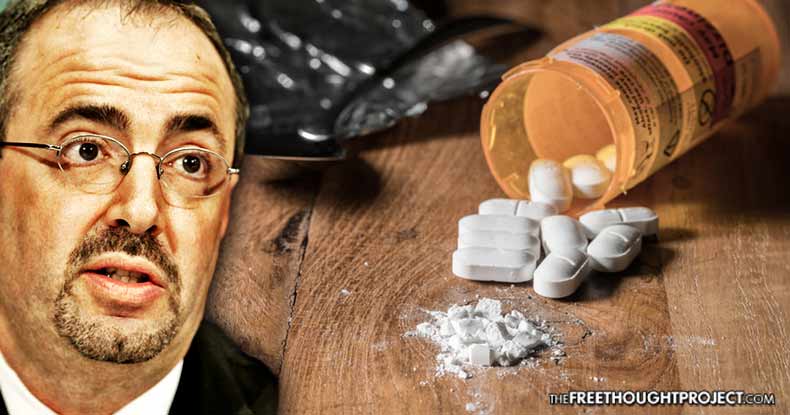 For many years, Joe Rannazzisi was the head of the DEA’s Office of Diversion Control the division responsible for investigating the pharmaceutical industry consisting of pharmaceutical companies, distributors, pharmacies, as well as doctors and clinics which prescribe the highly-addictive opiates.

After years of investigations, his team finally believed they’d pinpointed the source of the abuse in the supply chain; the distributors. The DEA uncovered unscrupulous shipping of opiates to pharmacies in towns with small populations.

He had harsh criticisms for the opiate drug industry. He told correspondent Bill Whitaker:

This is an industry that’s out of control. What they wanna do, is do what they wanna do, and not worry about what the law is. And if they don’t follow the law in the drug supply, people die. That’s just it. People die. This is an industry that allowed millions and millions of drugs to go into bad pharmacies and doctors’ offices that distributed them out to people who had no legitimate need for those drugs.

Rannazzisi identified the big three he says are the major players who have been targeted by the DEA and who quickly learned how to push back, effectively winning their fight against the DEA’s oversight. He named Cardinal Health, McKesson, and AmerisourceBergen and claimed they control 90 percent of the opiate distribution in the U.S.

The former DEA agent called it “a fact” that these companies are killing people by continuing to distribute dangerous opiates to crooked pharmacies which simply sell the goods to bad actors. Rannazzisi equated the distribution of the opiates to a band of drug dealers who were worse than street dealers:

These weren’t kids slinging crack on the Corner. These were professionals who were doing it. They were just drug dealers in lab coats.

Under the Controlled Substances Act, the distributors are supposed to report and stop shipments of suspicious orders (large shipments of opioids to people who have no legitimate need for those quantities of drugs).

Even after the distributors were fined millions of dollars by the DEA, little was done to curb the problem. The pharmaceutical distributors pushed back by recruiting lawyers from within the DEA to come and work with their companies. In essence, the drug companies recruited the very same lawyers who were writing policy for the DEA and who knew their loopholes and how to get the DEA off of their backs.

Linden Barber, who used to work for the DEA, jumped ship and went to work for the Quarles and Brady’s Health Law Group, helping clients navigate through compliance issues with the DEA.

Barber drafted the Marino Bill and lobbied Congress to introduce the bill with Tom Marino (R-PA). The bill became law, after passing without objection in both the House and the Senate and was signed into law in 2016 by President Barack H. Obama. It is known as the Ensuring Patient Access and Effective Drug Enforcement Act, a law which Rannazzisi claimed took away the DEA’s ability to reign in the unethical and illegal distribution of opiates to pharmacies which should not be receiving millions of pills of opiates only having a few residents to serve.

The new law makes it virtually impossible for the DEA to freeze suspicious narcotic shipments from the companies.

Marino then turned his attention to Rannazzisi. He asked the DEA to open an investigation into the head of the office of diversion claiming he was attempting to intimidate Congress. Rannazzisi was ultimately stripped of his supervisory leadership and he eventually resigned.

Now, according to the former DEA agent, no one up the supply chain can be held accountable for increased diversion of dangerous and addictive narcotics. Rannazzisi said now no one in a drug company can be held liable for negligence in protecting the controlled substances.

Marino, the Congressman who made it all possible, has now been nominated to be President Donald Trump’s drug czar. In other words, the lawmaker who helped get the DEA off the backs of the drug distributors is now supposedly going to be responsible for safeguarding the nation’s supply of controlled substances and making sure the drugs are not abused. For those families who have lost a loved one to an opiate overdose, having Marino as the drug czar may not be very comforting. After all, he was lobbied by the very industry which manufactures and distributes the very drugs which killed their loved ones.

The drug industry, the manufacturers, wholesalers, distributors and chain drugstores, have an influence over Congress that has never been seen before

As TFTP has reported, more Americans died in opiate and related heroin overdoes in 2016 than in the entire Vietnam War. It is an epidemic. And in the last decade, 200,000 Americans have died from prescription opioid overdoses. It is killing more Americans than guns or automobile accidents, and no one is doing anything about it. According to Rannazzisi, the DEA’s hands are now tied to plug the holes in the supply chain. The WAPO concluded, “Overdose deaths continue to rise. There is no end in sight.”