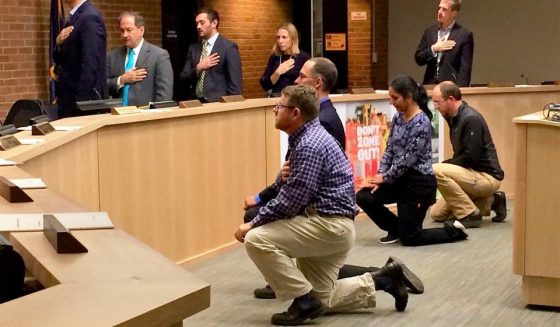 Is it time for those on the right to boycott the government? Well, it would make sense, since four Ann Arbor, Michigan city council members decided to take a knee during the pledge of allegiance.

During the pledge of allegiance at a meeting on Monday, October 16, four city council members decided to peacefully take a knee. Since the easily offended on the right have insisted on boycotting the NFL, and “hitting them in the pocketbooks,” will they feel the same about the government and quit paying their taxes? Not likely. 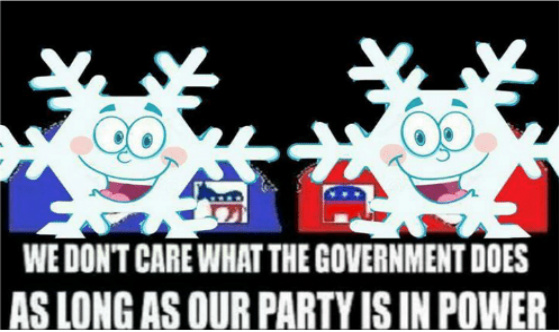 Chip Smith, 5th Ward; Chuck Warpehoski, 5th Ward; Sumi Kailasapathy, 1st Ward; and Jason Frenzel, 1st Ward; moved in front of the council’s table, turned toward the flag and took a knee when it came time to recite the Pledge of Allegiance after the meeting was called to order. Warpehoski said the decision was an act of attention, concern, and respect.

“I can’t speak to what is in each person’s heart, but for me to ‘take a knee’ is an act of attention, of concern, and of respect,” Warpehoski wrote on his website ahead of Monday’s meeting. He also stated at the meeting: “And it is in that spirit that I take a knee at tonight’s City Council meeting: out of respect for the aspiration that we be a nation ‘with liberty and justice for all,’ with full attention that we fall short of that ideal in many ways, and with humble dedication to continue to work that the promise of the pledge may be fulfilled.”

During the meeting, Kailasapathy said she knelt during the Pledge to demonstrate her commitment to upholding democratic values. “For me, taking a knee is also showing solidarity with the group of people who have been doing this at the national level,” she said.

Others did not immediately detail their reasons for kneeling. But this will likely be taken as disrespectful by those who care about and are easily offended by the peaceful actions of others. They won’t go after the government, however. It’s easier to go after “whiny babies” who make more money than they do and have the personal freedom afforded to them by virtue of the job they’ve chosen to peacefully protest in a manner they see fit.