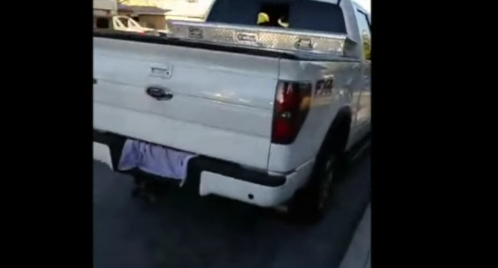 Why would a so-called ‘private security’ guard be driving around in an unmarked vehicle?

LAS VEGAS (INTELLIHUB) — A so-called ‘private security’ guard who is presumably a man by the name Troy Goff was confronted in front of Mandalay Bay security guard Jesus Campos’ residence where he was captured on video emerging from an unmarked (likely law enforcement) vehicle.

The security guard can be seen in the video getting out of a Ford truck which has a hand towel covering its license plate.

After the security guard was confronted by a concerned citizen, who was filming the entire encounter the citizen removed the towel which was covering the truck’s license plate revealing that there, in fact, was no license plate at all which is against the law (unless, of course, Goff is the law.)