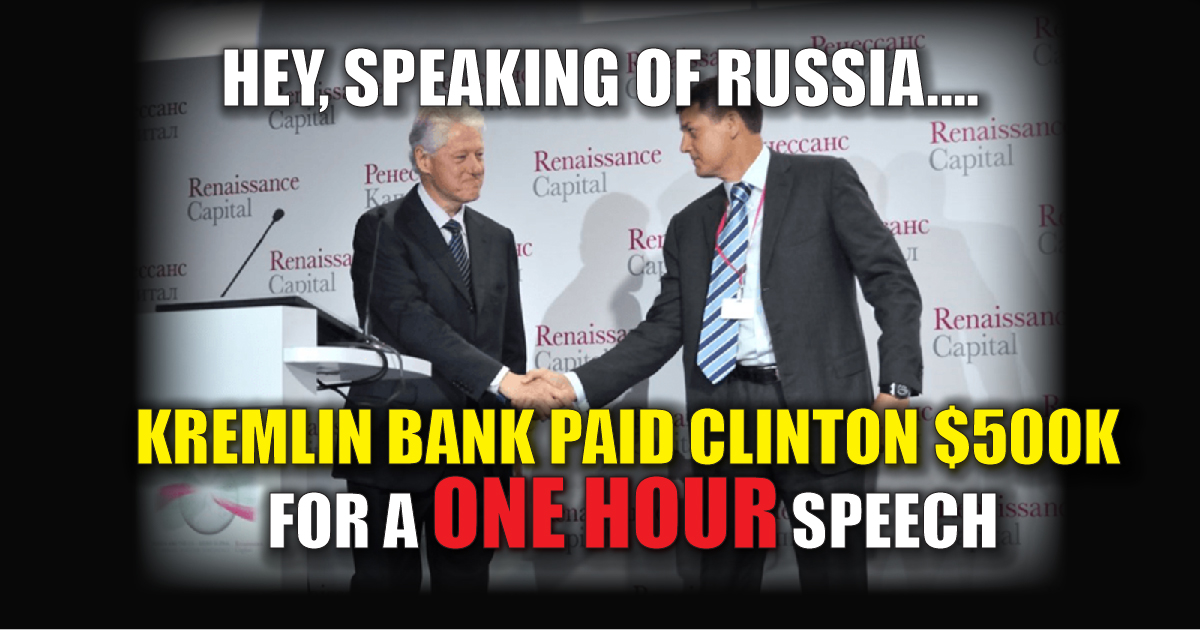 Monday, while on her book tour in the UK, pathological liar Hillary Clinton claimed to have broken her toe while “running down stairs” in heels and fallen backward. (As astute reader MomOfIV points out, it’s quite a feat to break a toe by falling backward.)

I pointed out in my post that Hillary’s story is incredible because:

Using the story of a broken toe, Hillary’s spokesman throws doubt on whether she could continue her book tour, which I predict she will discontinue, if she hasn’t done that already.

Here’s the real reason why the “broke a toe running down stairs wearing heels” cover story was concocted.

The news broke today that the Obama administration’s FBI and DOJ had known, as early as 2009, about a multi-million $ bribe that the Russian government “routed” to the Clinton Foundation while Hillary was secretary of state, prior to the State Department’s approval of a controversial deal in 2010 giving Moscow control of a large swath of American uranium.

John Solomon and Alison Spann report for The Hill, October 17, 2017, that according to government documents and interviews, federal agents had evidence as early as 2009 that Russian nuclear industry officials, in particular an official named Vadim Mikerin, were engaged in bribery, kickbacks, extortion and money laundering designed to grow Russia’s atomic energy business inside the United States, including:

The FBI’s evidence consists of an eyewitness account, and extensive financial records, secret recordings and intercept emails gathered by a confidential U.S. witness working inside the Russian nuclear industry.

Rather than bring charges in 2010, however, Obama’s Department of Justice (DOJ), under Attorney General Eric Holder, continued investigating the matter for nearly four more years, all the while leaving the American public and Congress in the dark, as the Obama administration made two major decisions benefiting Russia’s commercial nuclear ambitions:

Speaking on condition of anonymity for fear of retribution by U.S. or Russian officials, “a person who worked on the case” told The Hill:

“The Russians were compromising American contractors in the nuclear industry with kickbacks and extortion threats, all of which raised legitimate national security concerns. And none of that evidence got aired before the Obama administration made those decisions.”

Congress was kept in the dark.

Former Rep. Mike Rogers (R-Mich.), who chaired the House Intelligence Committee during the time the FBI probe was being conducted, told The Hill he had never been told anything about the Russian nuclear corruption case even though many fellow lawmakers had serious concerns about the Obama administration’s approval of the Uranium One deal:

“Not providing information on a corruption scheme before the Russian uranium deal was approved by U.S. regulators and engage appropriate congressional committees has served to undermine U.S. national security interests by the very people charged with protecting them. The Russian efforts to manipulate our American political enterprise is breathtaking.”