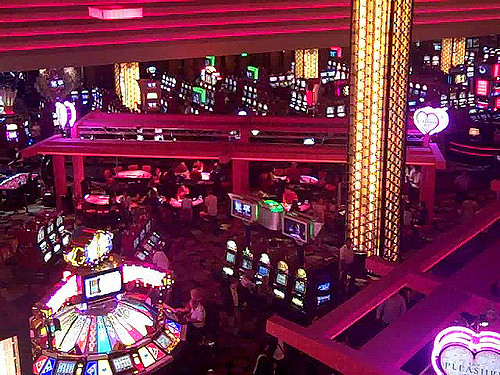 LAS VEGAS (INTELLIHUB) A woman who was inside Planet Hollywood the night of the Route 91 music festival massacre came forth with shocking details which prove that there was, in fact, gunfire outside of Planet Hollywood as other eyewitnesses have also reported.

The 48-year-old woman and resident of Detroit posted her shocking account to the “ZiderParty” YouTube channel on Tuesday where she explains that she was in Las Vegas for her brother’s wedding.

The woman called the event a “terrorist attack” and said that she was just sitting in Planet Hollywood gambling near the Yollo Mexican restaurant where she heard shots being fired out on the strip only “fifty to one-hundred feet away” outside of the doors.

That’s when the woman said that “people started pouring in” from the strip. It was “chaos,” she explained. “People were leaping over tables.”

The woman explained in her video that “her mind was racing” after she heard the automatic gunfire but said that she ran and traversed down a stairwell into the “service catacombs area underneath Planet Hollywood” where she retreated with a hoard of people.

She said that Planet Hollywood really had “their stuff together” and said that the security looked as if they “were ready for war.”

She explained how an armed four-man security team came down to extract everyone who had fled into the basement and said that Planet Hollywood gave a “formal announcement” that there was ‘an active shooter on the strip’ and told everyone that they were ‘guests of Planet Hollywood until further notice.’

“They told us do not tweet or live stream because it will be giving away the tactical position of police officers,” she said.

The next morning the woman explained that she had talked to a number of locals and people visiting who all had formed the same consensus, that the authorities were ‘lying’ about what had taken place and were covering up the scale of the actual attack.

“Everybody knows they were lying,” she said. “So I just want everyone to know that a whole lot of stuff went down that day and none of it is being reported on the mainstream news — none of it”

The witness said that she knows that somebody was shooting within close proximity of the door by Yollo which leads to the strip and that employees were told to keep quiet.

The following video shows what happened in Planet Hollywood just after shots were fired.