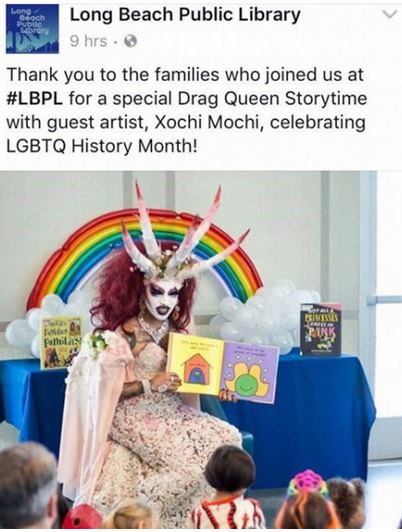 On October 14, 2017, the taxpayer-funded Long Beach Public Library in southern California saw fit to invite a drag queen in grotesque make-up with horns on his head, to read to little children to “celebrate” LGBT History Month.

Confusingly, many sites attributed the drag queen event as having been held at the “Michelle Obama Neighborhood Library” (MONL). While MONL has an “unofficial” Facebook page (whatever that means), the website given is that of the Long Beach Public Library: http://lbpl.org/.

In a statement on its Facebook page on October 16, two days after the drag queen book reading, Long Beach Public Library self-righteously and defensively proclaimed that because “the social media post the City of Long Beach Public Library shared to celebrate LBGTQ History Month received several hateful and harmful comments to the LGBTQ community, mostly from those outside of Long Beach . . . the City decided to remove the post as it was no longer a productive conversation.”

*NEW* BREAKING: Mark Zuckerberg Just Made MASSIVE Announcement To FACEBOOK Employees- This Could Be The END
America's Freedom Fighters