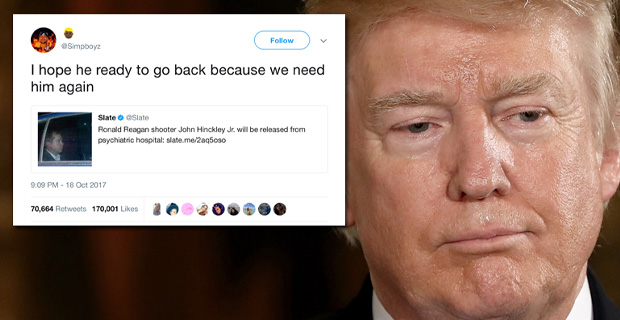 A tweet in which an individual ‘joked’ that John Hinckley Jr. should be prepared to go back to psychiatric hospital because “we need him again” to assassinate Trump received over 100,000 retweets and 250,000 likes on Twitter.

Reagan survived the assassination attempt despite being hit in the chest by a bullet that ricocheted off the side of the presidential limousine.

In response to a Slate article about Hinckley Jr.’s release from a psychiatric hospital, a Twitter user remarked, “I hope he ready to go back because we need him again.”

Users on the original Slate tweet that linked to the article about Hinckley Jr. being released also joked about him killing Trump.

“Maybe he can meet our new president,” remarked one.

“Drop him off at a gun show and tell him Trump is banging Jodie,” added another – a reference to Hinckley Jr.’s obsession with Jodie Foster.

While ‘jokes’ and serious assassination threats against Trump are rampant on Twitter, the fact that this one received over 100,000 retweets and 250,000 likes in just over 24 hours without being removed emphasizes how much of a far-left trash heap the social media network really is.