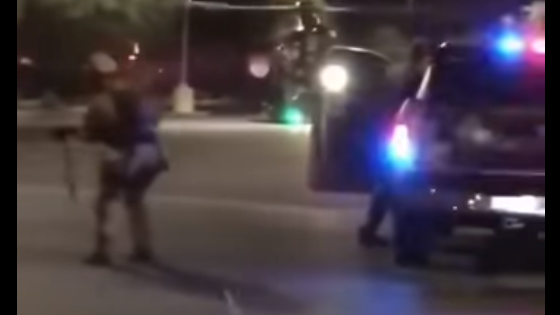 A shocking series of videos have been released over the last week that have many believing that multiple helicopters were used during the attack on the Route 91 music festival in Las Vegas that left 58 dead and over 500 injured.

While it is obviously impossible at this time to conclusively say anything did or didn’t happen during the attack, the fact that authorities have openly lied multiple times about the massacre increases the likelihood that they are covering up something big.

Could the cover-up involve the fact that helicopter “gunships” fired down into the crowd of concert goers while other shooters conducted attacks on the ground as reported by 5 different witnesses?

The following series of videos, at the very least, paint a picture of this being a shockingly real possibility.

Most researchers and readers of alternative media were first introduced to the possibility that helicopters were used in the attack after a video was released that seemed to show muzzles flashes coming from a helicopter that is aimed in the direction of the crowd.

As I reported early this week, “In an investigation where each day seemingly gets weirder than the last, the latest shocking revelation in the ongoing cover-up of what actually happened during the Las Vegas Massacre comes in the form of video footage that may prove that victims of the attack were fired upon from the air.”

“Astonishingly, new footage has emerged that may show muzzle flashes coming from the helicopter in what looks to be evidence that a team was firing into the crowd from the air on that fateful night.”

While the above video is important in its own right, researchers then began to analyze other video footage from the night and amazingly also found possible evidence of helicopters being used in the attack.

An in-depth investigation of one of the more viewed videos of the attack as it happened seems to also provide more proof. It is important to listen to the following video multiple times as the evidence can be hard to hear.

Another researcher took the time to analyze the first footage that shows muzzle flashes coming from a helicopter near the scene of the attack.

In what can only be described as a “WTF video” the following footage seems to literally show a team of unknown soldiers gearing up next to a helicopter near the Route 91 concert.

As Shepard Ambellas noted, “The 14-second clip shows several heavily armed men with belt-fed weapons gearing up for one of two things — either an aerial assault on the Route 91 crowd or an interception of the shooter who’s already in a helicopter. The men can be seen preparing to take off in the helicopter that just landed! But the question is, were they loading up before or after the shooting took place?”

“What time was this video captured? Who were these men? What agency is the helicopter in the background registered to? Are those guns M239 SAWs?”

It is important to remember that at this point it is simply not possible to “conclusively” prove something did or didn’t happen during the attack due to the fact that we know authorities are lying while at the same time hoarding most of the evidence needed to find out the truth.

What do you think? Were helicopters used during the horrific Las Vegas massacre?