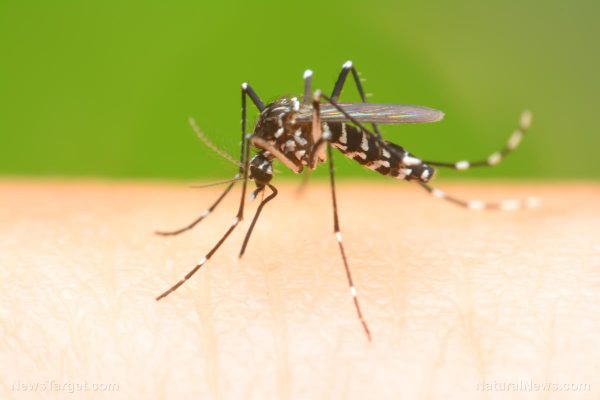 (Natural News) The scientific modification of plants and animals – and even humans – is often justified as being for the greater good. The long-term effects of such tinkering are often overlooked, however, and quite possibly pose serious and unexpected risks for humankind in the future. The most recent proof that the future effects of genetic modification can never really be fully understood in advance is an experiment on mosquitoes undertaken by the National Institute of Allergy and Infectious Diseases (NIAID).

Science Daily recently reported that there has been a lot of interest in recent years in genetically modifying mosquitoes to “reduce or prevent the spread of disease.” One of the challenges faced by scientists interested in pursuing this field of study is getting GM mosquitoes to mate with regular, wild bugs. However, when a research team from the NIAID recently altered the microbiota of GM mosquitoes to suppress the parasites which cause malaria in humans, they found that the GM mosquitoes actually preferred to mate with wild mosquitoes rather than their GM counterparts.

The researchers genetically modified Anopheles mosquitoes, which in nature spread the malaria-causing parasite Plasmodium. The team caged equal numbers of wild and GM mosquitoes and monitored their breeding over 10 generations. Ninety percent of the offspring in each generation passed along the GM trait. Even when combining 10 percent GM with 90 percent wild mosquitoes, the Plasmodium-resistance trait dominated after a few generations. Importantly, the GM mosquitoes maintained their resistance to the malaria parasite for 7 years.

The group also showed that the change in the microbiota resulted in a mating preference among the GM and wild mosquitoes. GM males showed a preference for wild females and wild males preferred GM females; these preferences contributed to the spread of the desired protective trait within the mosquito population.

Of course, the scientists were delighted with the unexpected result of their experiment. Nonetheless, it is sobering to realize that should these genetically modified mosquitoes get out into the wild they would very quickly completely overwhelm natural wild species. While this might sound like a good idea, we have no real idea what the ramifications of having genetically modified creatures overtaking natural species of any plant, animal or insect might be in the long-term.

And this is just one example of the dominance of genetically modified species. (Related: Has your DNA been altered by GMOs?)

Back in 2010, Scientific American reported that canola plants with several transgenic traits were growing wild all over North Dakota. Canola – a plant modified in Canada to produce vegetable oil from its seeds – is farmed extensively in the state, and can now be found growing wild all over the place.

“We found transgenic plants growing in the middle of nowhere, far from fields,” said ecologist Cindy Sagers of the University of Arkansas (U.A.) in Fayetteville. “One of the ones with multiple traits was [in the middle of] nowhere, and believe me, there’s a lot of nowhere in North Dakota — nowhere near a canola field.” (Related: Learn more about the dangers of GMOs at GMO.news.)

This is an indicator that GM canola plants are cross-pollinating and taking over the naturally occurring traits of natural plants. As weed scientist Carol Mallory-Smith of Oregon State University noted, the danger is that such traits could increase the “invasiveness or weediness” of plants which could invade and overtake farmers’ crops.

The finding provides, however, a warning for future genetic modifications that might increase fitness in all kinds of plants; it will be difficult to keep those traits on the farm and out of the wild.