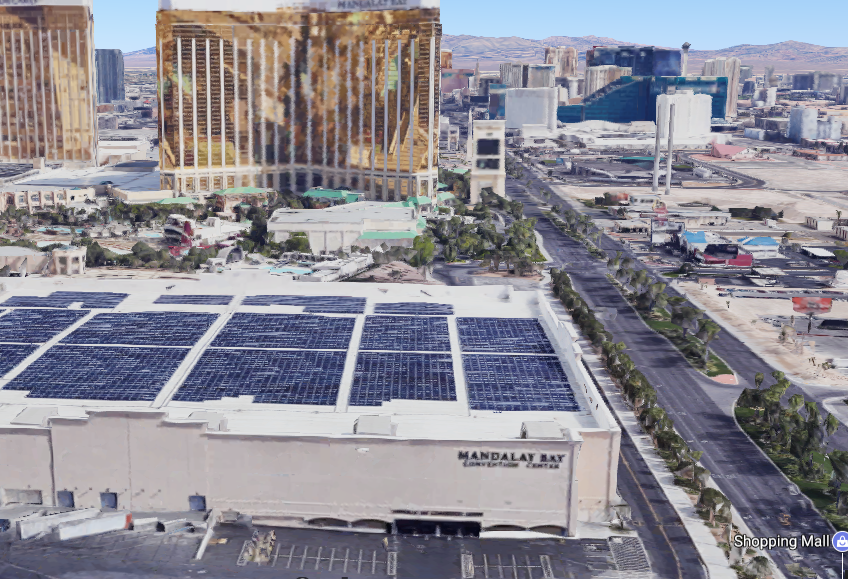 A second shooter fires from an elevated position at 10:04 p.m., before Paddock fires his first fully-automatic volley, video appears to show

(INTELLIHUB) — The purpose of this article is to open a real-time discussion and investigation into the very possibility that a ‘second shooter’ may have been firing from an elevated position on the northeast corner of the rooftop of the Mandalay Bay Convention Center from behind a raised parapet short wall.

At 3:08-1/2 into the video you can see what appears to be a single flash coming from above and beyond the rooftop of the Desert Oasis Motel just to the left of the most eastward Ferris wheel post. Then approx. 2.26 +/- seconds later (at nearly 3:11) the sound of the shot can be heard. It’s actually rather loud and appears to have caught the attention of a few people.

After doing an extensive analysis on the matter, I have determined that what looks/sounds like a muzzle flash/gunshot likely came from the northeast corner of the rooftop on the Mandalay Bay Convention Center which is 848 yards (2,545 ft.) away from where the videographer was located at the precise moment the shot is fired.

The following images illustrate what would be the shooter’s line of sight from the rooftop of the Mandalay Bay Convention Center may have looked like.

At a range of 848 yards (2,545 ft.), the sound would take 2.26 seconds (traveling at 1125 ft./sec.) to register in the videocamera’s microphone which seems to match up with what the videographer captured.

In the following image, the two Ferris wheel poles can be seen in the background to the left and beyond the poles, the venue can be seen.

The following image illustrates the shooter’s line of site.

You can view the full three-hour timeline analysis by Shepard Ambellas here.

The entire Intellihub investigation into the Las Vegas Shooting can be found here.