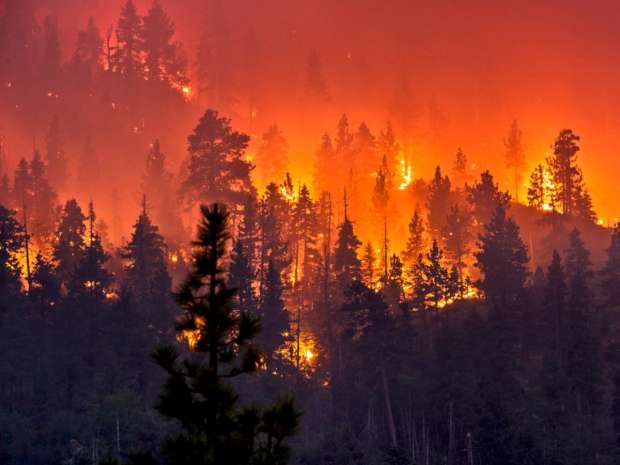 This article was originally published at Fellowship of the Minds

The Sonoma County wildfires are part of the still-ongoing terrible inferno in Northern California which had killed at least 42 people, burned more than 213,000 acres, destroyed 5,700 homes and businesses, and made homeless thousands of people and their companion animals. Although many evacuations have been lifted, tens of thousands of people still remain evacuated. (Source)

“confirmed on Thursday [October 19] that a man arrested in connection with setting a fire in Sonoma County Wine Country is an illegal alien from Mexico who has been twice returned to his ‘home country.’

Homan also confirmed that ICE has issued detainer requests for Jesus Fabian Gonzalez five times now in the past year alone, including the one issued on October 16 in relation to his most recent arrest on suspicion of arson. All of the arrests were made ‘by Sonoma County on various felony and misdemeanor charges,’ according to Homan.

Sonoma County [like all of the state of California] is considered a sanctuary jurisdiction and does not fully cooperate with federal immigration officials. That includes not honoring ICE detainer requests. ‘ICE was never notified of Mr. Gonzalez’ various releases,’ Homan wrote in the statement regarding Gonzalez.

There were several fires in the region, and it is not clear what role the fires Gonzalez allegedly set played in the overall disaster.“

“Once again, a non-cooperative jurisdiction has left their community vulnerable to dangerous individuals and preventable crimes. ICE lodged a detainer against Jesus Gonzalez with Sonoma County jail officials on October 16, following his arrest on felony charges for maliciously setting fire to a property. This is especially troubling in light of the massive wildfires already devastating the region. Over the past year, ICE has lodged detainers against Mr. Gonzalez after four separate arrests by Sonoma County on various felony and misdemeanor charges. ICE was never notified of Mr. Gonzalez’ various releases. Additionally, Mr. Gonzales has been returned to his home country of Mexico on two separate occasions. The residents of Sonoma County, and the state of California, deserve better than policies that expose them to avoidable dangers. Non-cooperation policies – now enshrined in California state law – ensure only one thing: criminals who would otherwise be deported will be released and left free to reoffend as they please.”

Note this sentence by Moons:

“There were several fires in the region, and it is not clear what role the fires Gonzalez allegedly set played in the overall disaster.“

In complete disregard of the above sentence, the Left are on a tear, trashing Moons’ report as scurrilous fake news.

Khan quotes Sonoma County Sheriff Rob Giordano‘s statement in a televised press conference “in an effort to shut down the baseless speculations”:

“There is a story out there that [Gonzalez] is the arsonist in these fires. That’s not the case. There is no indication he is related to these fires at all. … I wanted to kill that speculation right now, so we didn’t have things running too far out of control.”

The only problem is Breitbart reporter Moons never said Gonzalez had set all the wildfires of the ongoing inferno in Northern California.

Once again, this is what Moons, citing the Acting Director of federal agency ICE, wrote — that on October 16, an illegal alien named Jesus Fabian Gonzalez was arrested on suspicion for setting a fire in Sonoma County, but that while there were several fires in the region, “it is not clear what role the fires Gonzales allegedly set played in the overall disaster.”