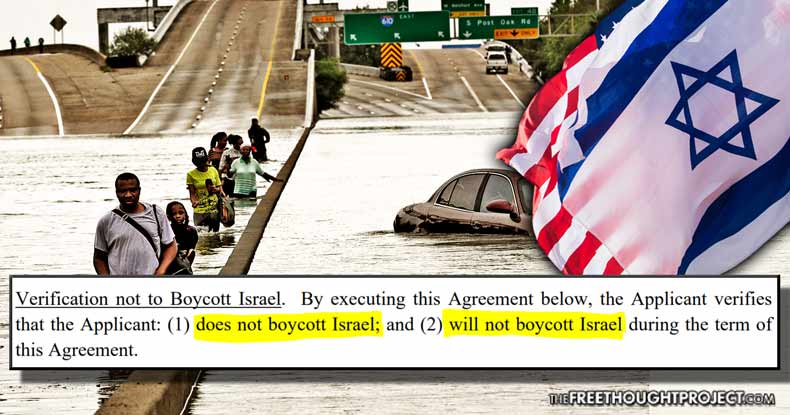 As the Americans who were affected by Hurricane Harvey attempt to rebuild their homes and replace their belongings, they have the option to request help from the city they live in—but residents in Dickinson, Texas, are learning that their city’s “Harvey Repair Grant” comes with a strange clause.

According to a document titled “Hurricane Harvey Repair Grant Application and Agreement” from the City of Dickinson, in addition to a requirement that the applicant “must adhere to all applicable rules, regulations, and laws, including building codes, safety rules and securing of all required permits,” there is also a “verification not to boycott Israel” agreement.

Former Congresswoman Cynthia McKinney drew attention to the document on Twitter, writing, “It’s true, folks. One has to pledge not to boycott Israel in order to get funding to rebuild your home.”

It's true, folks. One has to pledge not to boycott Israel in order to get funding to rebuild your home. https://t.co/OlOh5KCLLg

The American Civil Liberties Union released a statement criticizing the requirement and noting that while“the city appears to be enforcing a recently passed Texas law that requires all state contractors to certify that they are not participating in boycotts of Israel,” it is still a clear violation of the First Amendment.

“The First Amendment protects Americans’ right to boycott, and the government cannot condition hurricane relief or any other public benefit on a commitment to refrain from protected political expression. Dickinson’s requirement is an egregious violation of the First Amendment, reminiscent of McCarthy-era loyalty oaths requiring Americans to disavow membership in the Communist party and other forms of ‘subversive’ activity.”

The Supreme Court ruled on the “right to boycott” in the 1982 case of NAACP v. Claiborne Hardware Co. As the ACLU noted, the Supreme Court acknowledged that the NAACP’s decision to boycott a Mississippi business to protest segregation and racial injustice was “a protected form of free association and free expression,” based on the fact that “political boycotts empower individuals to collectively express their dissatisfaction with the status quo and advocate for political, social, and economic change. These are precisely the freedoms the Constitution is meant to protect.”

As The Free Thought Project reported in July, the United States Congress is currently considering the Israel Anti-Boycott Act, which would make it a crime to “boycott Israel” that could lead to “a minimum civil penalty of $250,000 and a maximum criminal penalty of $1 million and 20 years in prison.”

“Under the terms of the bill, a pair of U.S. laws that prohibit U.S. citizens from supporting a boycott request from a foreign government against an ally of the United States would be updated to specifically prohibit Americans from supporting international boycott efforts against Israel.”

In addition to the problems that stem from the fact that requiring Americans to agree to not “boycott Israel” is in direct violation of their rights to free speech guaranteed by the First Amendment, it is also a broad term that can be defined in a number of ways.

Does agreeing not to boycott Israel mean that one specifically agrees not to support the Boycott, Divest, and Sanction Movement against Israel, or can the meaning be as broad as to include that one agrees to not criticize the Israeli government, the blockade it has imposed on Palestine, or even the nearly $4 Billion the U.S. sends Israel in military assistance each year?

In the following video, former Texas Congressman Ron Paul looks at the proposed Israel Anti-Boycott Act and notes that even some Americans who support the United States’ close relationship with Israel, have criticized the act for violating the First Amendment.