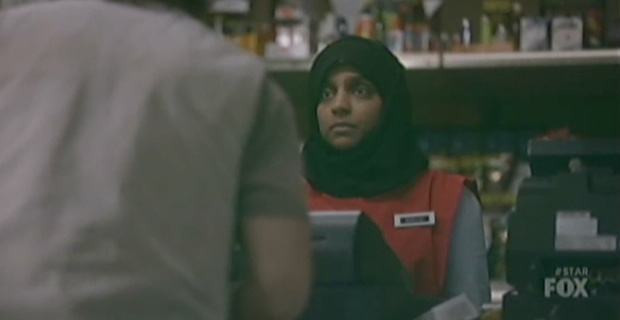 When there’s not enough real hate crimes, just insert them into fictional shows

When there aren’t enough real hate crimes to exploit to push your political agenda, why not just insert them into the scripts of popular TV shows?

That’s what the writers of Star, a Fox drama about the music industry, decided to do by portraying two white racists harassing a Muslim woman and then dumping a ‘Black Lives Matter’ activist out of his wheelchair.

The episode followed one of the show’s main characters, Derek, as he tried to get over his bad mood about being paralysed by getting out of the house.

The clip shows Derek in a convenience before he sees the two men harassing a female Muslim cashier wearing a hijab.

“This is Hollywood’s idea of everyday America — white Islamophobes threatening a Muslim woman, writes Alex Parker. “The two men, Nick and his brother, are trying to buy cigarettes and chewing tobacco — naturally, because everyone knows white rednecks and chewing tobacco go together like pork and beans.”

Soraya: I don’t want any trouble. I just…

Nick: Shut up. I lost my damn job over some politically correct bull like this. You people taking everything from us. That Chinaman fired me…

Soraya: I didn’t take anything from you, and I suggest that you leave.

Nick: You leave this country. Leave something for my kid brother.

Derek then intervenes on behalf of the poor victimised Muslim girl.

Brother: Stay out of this, gimp.

The two evil white racists then violently dump Derek out of his wheelchair and leave the store cackling while the Muslim woman comes to his aid.

“These characters aren’t just the stereotypes of lazy screenwriting; they’re weapons of the Left’s culture war against conservative America. With every scene like this one from Star, the message is being sent that Muslims are peaceful American patriots, whites are racist rednecks, and Black Lives Matter actually cares about black lives,” adds Parker.

As we have previously highlighted, there is an epidemic of fake hate crimes, some of which were initially blamed on Trump supporters, that turned out to be complete hoaxes.

This is yet another example of how political indoctrination is being inserted into TV shows, sports and movies – a process that is causing huge numbers of Americans to boycott those mediums of entertainment in disgust.