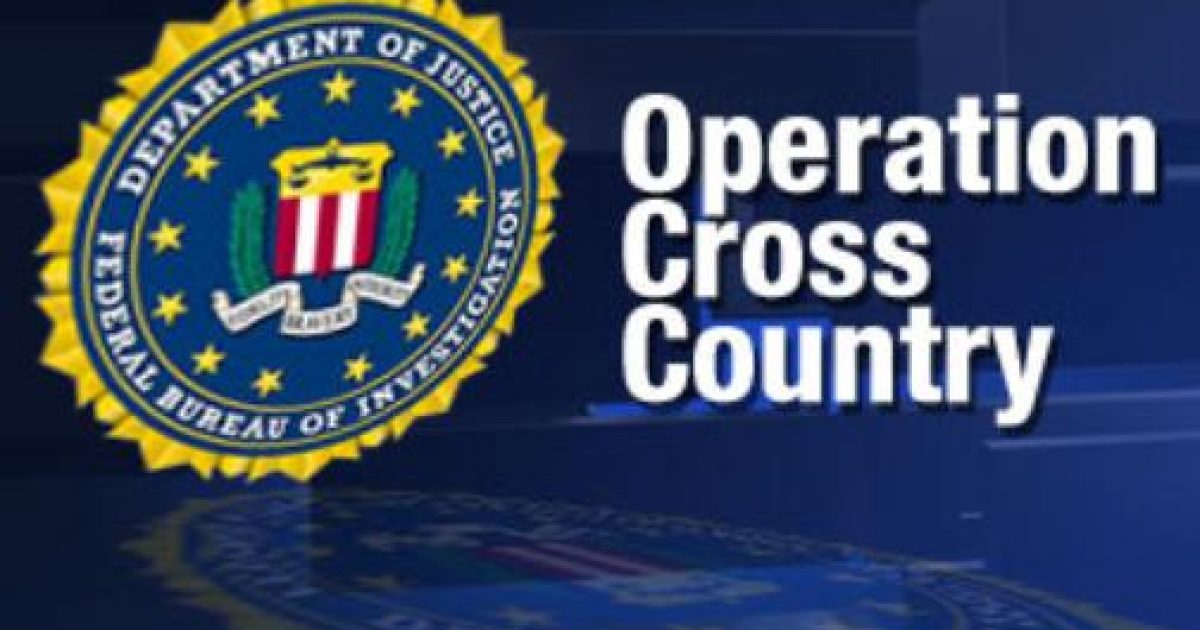 The Federal Bureau of Investigation’s Operation Cross Country has just completed its eleventh iteration and according to the FBI, they recovered 84 sexually exploited juveniles and arrested 120 traffickers.

According to the FBI’s website, “Operation Cross Country has expanded beyond the United States, with Canada, the United Kingdom, Cambodia, the Philippines, and Thailand undertaking similar operations. Their efforts were coordinated with the FBI and its local, state, and federal law enforcement partners—along with the National Center for Missing & Exploited Children (NCMEC)—during the four-day law enforcement action that ended October 15.”

More than 100 victim specialists provided on-scene services that included crisis intervention as well as resources for basic needs such as food, clothing, shelter, and medical attention.

One of the highlights of the operation involved FBI Denver’s Rocky Mountain Innocence Lost Task Force. They recovered a 3-month-old girl and her five-year-old sister after a friend who was staying with the family made a deal with an undercover task force officer to sell both children for sex in exchange for $600.

“The threat of child sex trafficking is something the FBI works on every single day,” said Calvin Shivers, special agent in charge of the Denver Division. “Operation Cross Country gives us the opportunity to shine a light on this threat and to educate the public.” He added that while the focused law enforcement action has “an immediate impact” of recovering a significant number of juvenile victims, “we recognize that there is a lot more work to be done to identify and recover even more victims.”

The FBI formed the Innocence Lost National Initiative in 2003. Since its creation, the program has resulted in the identification and recovery of more than 6,500 children from child sex trafficking and the prosecution of countless traffickers, more than 30 of whom have received life sentences for their crimes.

“We at the FBI have no greater mission than to protect our nation’s children from harm,” said FBI Director Christopher Wray. “Unfortunately, the number of traffickers arrested—and the number of children recovered—reinforces why we need to continue to do this important work.”

“This operation isn’t just about taking traffickers off the street,” FBI Director Wray said. “It’s about making sure we offer help and a way out to these young victims who find themselves caught in a vicious cycle of abuse.”

“Child sex trafficking is happening in every community across America,” said John Clark, the CEO of NCMEC. “We are working to combat this problem every day,” he explained, adding that NCMEC is “proud to work with the FBI on Operation Cross Country to help find and recover child victims.”

You know, I’m glad these children were recovered. I’m glad that human traffickers are being apprehended. I’m not happy about life sentences. I think the death penalty applies here.

For two weeks in the spring of 2015, the FBI was one of the largest purveyors of child pornography on the internet.

After arresting the North Carolina administrator of The Playpen, a “dark web” child-pornography internet bulletin board, agents seized the site’s server and moved it to an FBI warehouse in Virginia.

They then initiated “Operation Pacifier,” a sting and computer-hacking operation of unparalleled scope that has thus far led to criminal charges against 186 people, including at least five in Washington state.

The investigation has sparked a growing social and legal controversy over the FBI’s tactics and the impact on internet privacy. Some critics have compared the sting to the notorious Operation Fast and Furious, in which the Bureau of Alcohol, Tobacco, Firearms and Explosives allowed the illegal sales of thousands of guns to drug smugglers, who later used them in crimes.

Defense attorneys and some legal scholars suggest the FBI committed more serious crimes than those they’ve arrested — distributing pornography, compared with viewing or receiving it.

Court documents specify that as many as 100,000 people logged onto the site.

So, when are we going to see prosecution of every single federal agent involved in Operation Pacifier, as well as any DOJ participants?

Not only is this a problem when it comes to morality and ethics, but the subsequent arrests and charges are compromised as the FBI failed to share with the court exactly how Operation Pacifier was conducted.

Lest you think this is something limited to the FBI, I recently reported that a major international police operation to entrap child predators involved a deep dark website that was secretly run by police.

In that report, Jon Rouse, detective inspector, and investigator Paul Griffiths had been running the website “Child’s Play” for at least three months.

Police exploiting children and using that exploitation as bait to apprehend criminals doing the same thing they are doing is wrong.