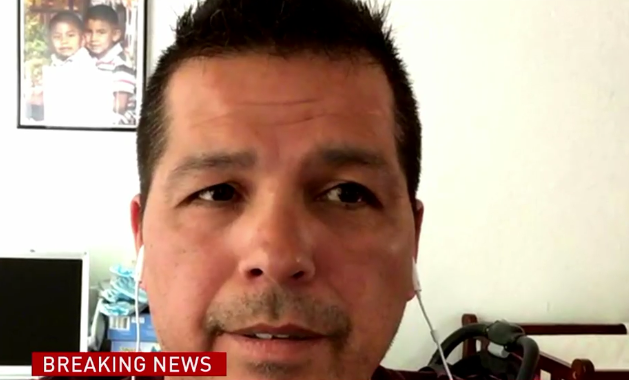 (INTELLIHUB) Los Angeles-based photographer Jody Kechego says he was filming a timelapse on the roof of the Mandalay Bay while listening to a radio program through his earbuds when hotel security ascended to the rooftop and alerted him that shots were being fired.

Kechego told CBC News that as soon as he removed his earbuds a burst of ‘really loud’ rapid-fire could be heard.

The photographer said, he and security looked over the edge of the roof at one point and saw a bunch of people laying down by the stage of the Route 91 Music Festival who were grouped together.

“We didn’t know if they were dead or alive [and] we had no idea where the shots were coming from,” he explained.

From Kechego’s vantage point he could see concertgoers ‘streaming out different exits’ in the venue between each volley of gunfire as they were running for their lives.

In the interview, Kechego confirms that several different types of guns were being fired which contradicts the official story.

“[…] the shots stopped and then there were some single shots, like a pistol,” Kechego said. “There was about four or five single shots that went off so we had no idea how many people were shooting or anything.”

Astonishingly, the photographer’s account matches up with several audible single shots captured on video by a pedestrian who was sitting at the bus stop outside of Mandalay Bay on Las Vegas Blvd at the time. In that video (below), a woman can be heard explaining how pieces of glass were falling from the Mandalay Bay immediately following the shots.

Why would 2-5 single gunshots be heard if Stephen Paddock purportedly killed himself after his final volley? More importantly, why would glass fall from the 32nd-floor after all of the fully-automatic vollies ended right when 2-5 single shots could be heard? I guess for now those will just have to remain questions.

Back to the story.

Moments later, Kechego said that security told him to get the cameras and prepare to ‘evacuate the building’ which is when Kechego said he got nervous.

‘At one point the police helicopter shined its light on me but the security must have somehow told them it’s okay,’ Kechego said. “They flew away after that and I was able to get the cameras out.”

According to Kechego, once he entered the building and started to make his descent from the rooftop along with security, someone yelled out ‘there’s a shooter in the building’ which elevated his fear until a strike team arrived and took him and ’80 others’ to a secure location.

The photographer also told CBC News that he was virtually right above the shooter but said that he “didn’t know it at the time.”

It is also important to point out that the photographer wasn’t the only person spotted with a ‘suspicious black plastic case’ near the strip that night. An eyewitness to an ‘active shooter’ event which occurred at the Tropicana said the same thing, as I already reported for Intellihub in the Oct. 6 article titled “Eyewitness account of rapid gunfire, muzzle flash, people shot at Tropicana, ‘blood on walls’: Las Vegas shooting.”

In the article, I wrote:

Astonishingly, Rios’s report dovetails with police audio which was captured the night of the shooting where medics reported that they were ‘taking fire outside the Tropicana’around 11:40 p.m.

‘I wanted to know what was in the suitcase,’ Rios explained. ‘Something was wrong and I didn’t like it. I felt like it was a planned setup and so I confronted him.’

“I mean this guy, how could you be so calm when everybody is running through, people, blood everywhere,” he questioned. “There was a guy down on the ground next to the wall bleeding and he was dead, my girlfriend saw him. […] This guy was on the ground he had shots to his legs, shots on his torso […] and he was shot in the arm. […] he was dead. He already had his head back and his eyes were closed, he wasn’t moving.”

That’s when Rios said the guy looked him in the eyes the entire time as he bent down to open the case. However, at that precise moment, Rios said that ‘shots rang out’ right there either inside or just outside of the Tropicana.

“[The shots sounded] totally different. There were ARs and they were suppressed,” he added. ‘It was three bursts inside the Tropicana inside the casino. People who were there will tell you that that happened and it was confirmed via those people who were in there.”

Rios said that the guy with the suitcase ran into the casino once shots were fired.

“And yes I do believe that if he would have opened up the suitcase that he was just ready to shoot me down,” he said.

That’s when Rios and his girlfriend exited the building and ran down an alleyway located near the west side of Tropicana’s property where they proceeded to hide in an industrial dumpster for the next three hours. However, upon entering the dumpster the two heard shots and saw ‘muzzle flash’ coming from the ‘Excaliber/New York New York area which again matches up with police audio and reports of ‘shots fired at New York New York.’