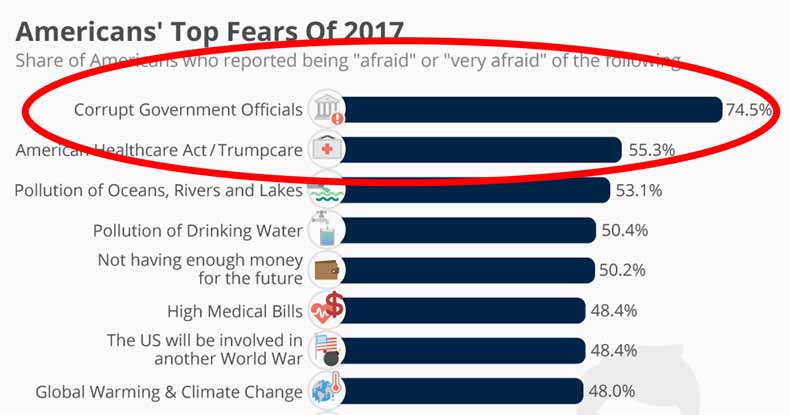 An extensive survey of hundreds of adults across the United States has just revealed that the thing most Americans fear—more than anything else—is their own government. In fact, according to the survey, no other fear even comes close to the percentage of Americans who worry about their corrupt government officials.

The survey was conducted by Chapman University and it serves to back up the point that while Americans claim to live in the Land of the Free, deep down, they realize they are living in a corrupt oligarchy.

The Chapman University Survey of American Fears Wave 4 (2017) provides an in-depth examination into the fears of average Americans. In May of 2017, a random sample of 1,207 adults from across the United States were asked their level of fear about eighty different fears across a huge variety of topics ranging from crime, the government, the environment, disasters, personal anxieties, technology and many others.

As Statista’s Niall McCarthy notes, like last year, corruption of government officials came top in 2017, with 74.5 percent of U.S. adults saying it makes them “afraid” or “very afraid.” 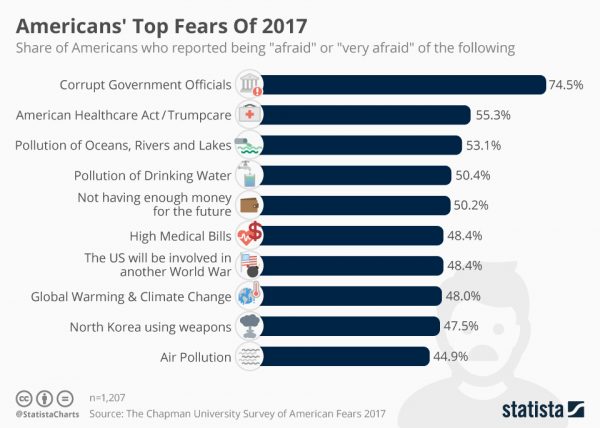 Despite the constant fear mongering from the mainstream media and government on boogeymen terrorists plotting to steal our freedom, the public, according to this survey, is not buying it. In fact, the threat of terrorism isn’t even in the top 20 fears. Terrorism comes in at twenty-two—below credit card fraud and identity theft.

While this survey is certainly promising, in the idea that people are waking up to government corruption, it is also a telling sign of America’s ability to hold two entirely contradictory ideas as self-evident.

This ability, or perhaps better defined as “disability,” to hold two opposing ideas, such as the spreading offreedom through war, as being logically sound, is called cognitive dissonance. When one is in a state of dissonance, they may sometimes feel “disequilibrium”: frustration, hunger, dread, guilt, anger, embarrassment, anxiety, etc.

In order for cognitive dissonance to work, society must remain just ignorant enough to support and to believe the lies fed to them from the establishment as reality; even though this reality is a complete contradiction.

Once we step back and observe society with this in mind, the reason for this contradictory mental state becomes quite obvious. It is much easier to remain delusional and in a state of suspended disbelief than it is to deal with the opposing ideas held inside one’s head. How can one chant “USA is number 1!” while at the same time fearing the rulers of that USA?

Coming to terms with the fact that you can actually be killed by the very entity who claims to protect you from those who wish to do you harm, is a difficult realization.

Fortunately, there are those of us who have ‘woken up’ to our contradictory existence. This is not to say that we are smarter than others, only that we can recognize our own ignorance and through this self-reflection, seek to lessen that ignorance through entertaining ideas that may make us uncomfortable.

If this survey shows us anything, it is that Americans would do well to entertain the uncomfortable idea that this country they hold so high up on a pedestal has actually long been on a path to become the dystopian nightmare written about in books like 1984.

Americans would do well to remember the words by John Basil Barnhill in 1914 when he said,