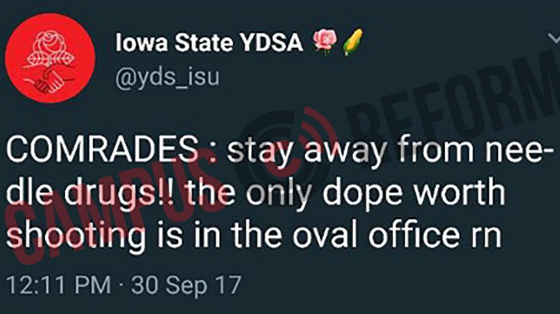 In yet another shocking example of the violent rhetoric coming from the hard-left, a socialist student group at Iowa State University has used their social media account to threaten to murder conservatives.

The threats have come in a series of Tweets that have left many horrified over the calls for violence. Amazingly, the school itself has claimed that calling for murder is “protected free speech.”

In one recent Tweet the group, Young Democratic Socialists of America, (YDSA) publicly calls for exterminating what amounts to tens of millions of Americans.

“The left has done a good job radicalizing juggalos, weebs, furries, but I will not rest until ‘hXc’ stands for hang+Xterminate capitalists,” the school administration backed group declared before eventually deleting the Tweet.

As Campus Reform noted, after the students brought the tweet to the attention of the university, they were told that this “falls under free speech” while being offered “resources” if the student felt threatened by a literal call for extermination. That’s right, school officials are defending this groups right to call for us to be murdered. Can you imagine if the roles were reversed?!

The open call for violence against the right doesn’t stop there, as the group had previously tweeted its support for the assassination of the President of the United States.

“COMRADES: stay away from needle drugs! The only dope worth shooting is in the oval office rn [right now],” the group tweeted. Eventually this call for violence was also deleted.

Stunningly, the organization that posted the tweet isn’t some random Facebook group rather they are an officially registered student group at the university.

While the university did not respond to Campus Reform’s request for comment, one student asserted that YDSA has a long-established pattern of making vitriolic remarks about conservatives.

Overall, the club has had many hateful tweets against capitalism and capitalists, with the occasional directly-threatening tweet as shown above,” student Michael Fredrickson told Campus Reform.

“If this was a conservative group, all hell would break loose. It wouldn’t be allowed. Making them delete tweets isn’t going to do anything,” a recent graduate of the university commented on Twitter. “Why isn’t the school doing something? This sounds like a threat to students on campus and in the Ames area. How is this allowed?”

Everyday, Americans are subject to mainstream media propaganda that paints Trump supporters as racist enemies yet in reality groups like YDSA are the ones actually calling for violence against the people they disagree with.

One has to wonder what the socialist group actually has to do to receive any sort of punishment from the university?