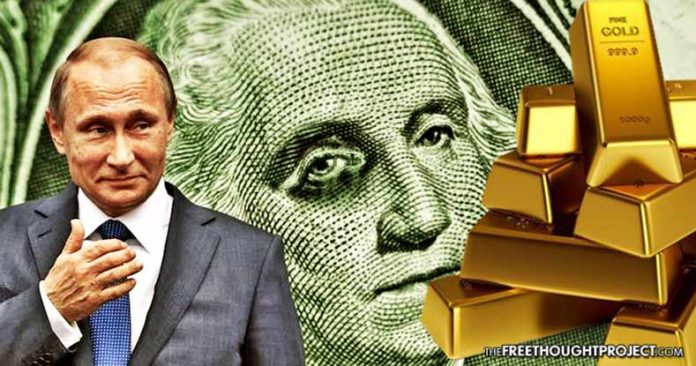 The Central Bank of Russia has more than doubled the pace of its gold purchases, and tripled its gold reserves—from around 600 tonnes to 1,800 tonnes—bringing its international gold reserves to the highest level since Putin became President 17 years ago, according to the World Gold Council.

The impetus for the massive increase in Russian gold reserves is their desire to break away from the hegemony of the U.S. petrodollar and dollar-based payment systems. Currently, over 60 percent of global reserves and 80 percent of global payments are denominated dollars, according to James Rickards, author of Currency Wars.

Additionally, the U.S. is the only country with veto power at the International Monetary Fund, known as the global lender of last resort. Thus, one of the most crucial weapons wielded by Russia, in its war to free itself from the hegemony of the petrodollar, is gold.

The reason gold is so critical is that it cannot be manipulated by U.S.-based economic warfare, as it cannot be frozen out as other forms of digital and paper fiat can be.

Gold can simply be loaded onto pallets and shipped to another state to make a payment, thus bypassing targeted economic sanctions that are often used by the United States as a means of attempting to force geopolitical compliance by Russia and other countries. The strategic significance of gold is so great, that even when oil prices and Russian financial reserves were collapsing in 2015, they continued to acquire gold.

In fact, during the second quarter of 2017, Russia accounted for 38 percent of all gold purchased by central banks. The massive increase in Russian gold reserves has taken place while simultaneously abstaining from purchasing foreign currency for more than two years.

Even as global demand for gold fell to a two-year low in the second quarter, Russia maintained its strong position due to gold being one of the most geopolitical-proof investments in the world. In a time of increased economic warfare, with the petrodollar being utilized as a weapon by the U.S., gold is a means of bypassing U.S. sanctions.

“Gold is an asset that is independent of any government and, in effect, given what is usually held in reserves, any Western government,” said Matthew Turner, metals analyst at Macquarie Group in London.“This might appeal given Russia has faced financial sanctions.”

In addition to being the largest international purchaser of gold, Russia is also one of the three biggest gold producers in the world, as the Central Bank of Russia purchases gold from domestic mines using commercial banks and not in the open market.

Russia’s accelerated pace of gold bullion purchases began in 2007, with Russian gold holdings now having quadrupled to 1,556 tonnes at the end of June. In terms of total reserves, Russian now comes in just behind China and has more gold reserves than India, Mexico and Turkey combined, with a total of nearly $427 billion in reserves.

One of the most threatening uses of U.S. financial influence has been its utilization of the SWIFT payment system, which acts as a hub of global money transfer message traffic, as the U.S. threatens to cut other nations off from the system if they refuse to be subservient to U.S. hegemonic dictates.

Russia clearly understands its vulnerability to U.S. domination and has worked diligently to reduce that vulnerability. In turn, Russia has created an alternative to SWIFT.

“There was the threat of being shut out of SWIFT. We updated our transaction system, and if anything happens, all SWIFT-format operations will continue to work. We created an analogous system,” Elvira Nabiullina, head of Russia’s central bank, reported to Vladimir Putin.

Russia is also part of a reported Chinese plan to install a new international monetary order that excludes U.S. dollars. Under that plan, China could buy Russian oil with yuan and Russia could then exchange that yuan for gold on the Shanghai exchange.