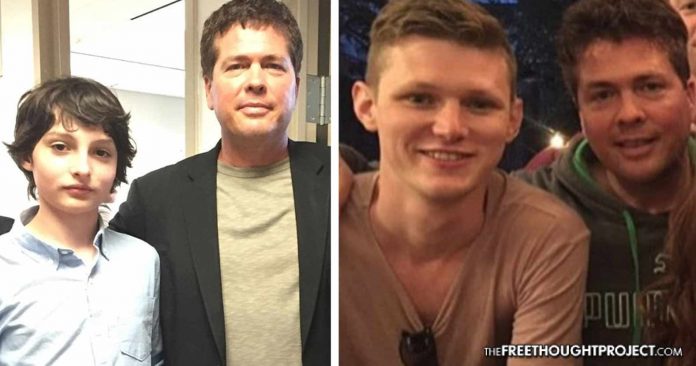 As The Free Thought Project has predicted on numerous occasions, Harvey Weinstein’s demise is allowing for the era of secrecy and silence involving pedophilia in Hollywood to finally be exposed — forcing change.

On Friday, youth talent agent Tyler Grasham was fired from APA talent agency following sexual abuse allegations from many of the actors he represented. According to the Daily Mail, the allegations first surfaced on social media and expanded to include many high-profile actors. Grasham is a veteran of the industry and has represented child actors for decades.

Former child star Blaise Godbe Lipman posted a “#MeToo” open letter on Instagram and Facebook accusing Grasham of abusing him and leveling allegations that the APA knew about it, yet chose to do nothing. Following Lipman’s revelation, the allegation ran its own course, a route that has now led to Grasham’s firing.

Lipman said that he was a minor when, while attempting to get him to sign with APA, the talent agent got him drunk and then sexually assaulted him:

“Tyler Grasham, under the pretense of a business meeting regarding potential agency representation at APA Agency, fed me alcohol while I was underage and sexually assaulted me. [The] APA AGENCY HAS KEPT THIS MAN EMPLOYED, WORKING WITH KID ACTORS. I FIND IT INCREDIBLY DIFFICULT TO BELIEVE THEY DO NOT KNOW OF HIS PREDATORY BEHAVIOR, USING HIS POSITION WITHIN THE COMPANY TO PREY ON NAIVE KIDS.”

In a recent interview, Lipman described the incident in question, which took place when he was 17. “We were at his apartment when he got on top of me and fondled me. I pushed him off without trying to upset him,” he said. “It was a very precarious position to be in, not to insult someone who was in a position of power.”

Other young men have since come forward sharing similar stories of abuse, all involving Grasham. On Thursday, film and TV editor Lucas Ozarowski, 27, came forward with a similar accusation. He claimed Grasham attempted to get him drunk and take advantage of him. Ozarowski said the agent took him back to his home after the boy got drunk and then began to “aggressively grope” him until he forced the former APA agent off of him and left.

“When I was 21, Tyler Grasham repeatedly harassed me about my sexuality, and forcibly implied he could ‘protect me’ if I joined his roster,” Gavaris tweeted, adding “APA was well aware of Grasham’s reputation, as was most of this town.”

When I was 21, Tyler Grasham repeatedly harassed me about my sexuality, and forcibly implied he could “protect me” if I joined his roster…

But that if I didn't, my career may be derailed.

Also on Friday, a more serious allegation of pedophilia was leveled by Brady Lindsey, 19, against Grasham. Lindsey reportedly said the talent agent wanted him to move from Utah to California and start a family with him when the boy was only 16.

“I didn’t know who he was. He said he was a big-time agent in L.A. and he worked at APA…It was all talk of getting me gigs, but not being able to sign me up at the agency until I was already getting work.”

But Lindsey said there was nothing sexual involved until after he turned 18 and moved to California where he met with Grasham who then allegedly invited Lindsey to his home for dessert. It was at Grasham’s home that Lindsey said the talent agent made “unwelcomed advances” to “kiss and cuddle” which Lindsey said he consented to.

After Grasham was outed as a serial sexual harasser with pedophilia leanings according to the allegations, Canadian child actor Finn Wolfhard, 14, who plays Mike Wheeler in the hit Netflix series “Stranger Things” quit the agency altogether. Whether or not Wheeler was abused remains to be revealed.

While multiple accusations have been made by former child and adult actors alike, Grasham becomes the first one to be exposed and fired. Hopefully, this trend continues and these monsters fall like dominos.