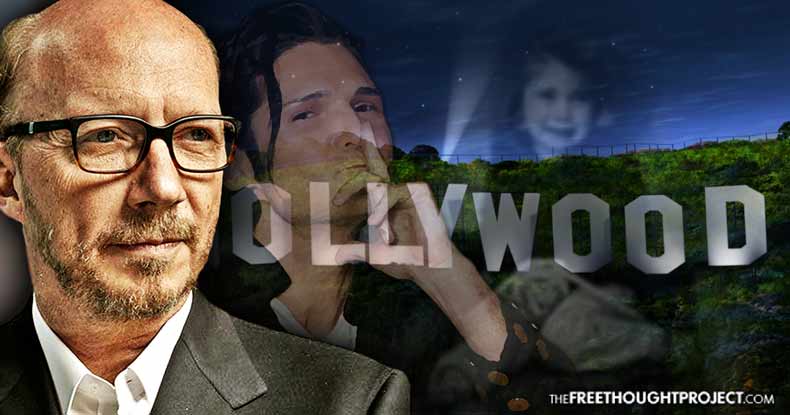 Hollywood, CA – In the wake of the public revelations regarding movie mogul Harvey Weinstein’s repeated sexual abuse and misconduct, Oscar-winning writer-director Paul Haggis has now come forward to suggest that Hollywood is still covering up credible and serious allegations of pedophilia.

While being interviewed by The Guardian over the weekend, Haggis intimated that although there has been much said about Hollywood’s treatment of women – the open secret of widespread pedophilia being commonplace in Tinseltown should not be forgotten.

Haggis noted that many former child actors, such as Corey Haim and Corey Feldman, have come forward to allege being molested and raped by heavy-hitters in the movie industry.

“It is not an innocent place and never has been,” Haggis told The Guardian. “Most of this behavior has been aimed at women, but I am sure that former child stars such as Corey Feldman and Corey Haim, who have both made allegations in the past that no one took seriously, are worth considering, too.”

“Were people covering for pedophiles, too?” Haggis asked. “We have to think that may have happened as well, because no one speaks out about being abused just to benefit their career. I find it particularly terrible that people had their dreams held to ransom in that way.”

While Hollywood’s proclivity for pedophilia has been an open secret in the film industry for years, the increased attention being paid to sexual abuse in the industry since the public allegations against Weinstein – which now includes reports of sexual assault by 60 women – is precipitating industry-wide scrutiny of past claims of pedophilia.

Corey Feldman — who rose to fame alongside Haim in the 80s in films like The Lost Boys and License to Drive — has repeatedly said that he would love to “name names” of Hollywood figures who he claims abused him, but will not do so in an effort to protect his own family from harm.

ALSO LET ME ADD, THIS IS NOT ABOUT FEAR OF BEING SUED! YES THATS A REAL POSSIBILITY BUT THE BIGGER REASON IS SAFETY 4 MY FAMILY!

With the Weinstein scandal blowing the doors open, a documentary titled, “An Open Secret,” which premiered a few years ago to mass publicity but failed to gain digital distribution, has been officially posted online for the first time by the producer in the wake of recent events.

“It’s so funny to keep seeing headlines about how Harvey’s abuse was ‘an open secret’ in Hollywood, and that’s the name of our film,” producer Gabe Hoffman told The Hollywood Reporter.

The documentary delves into the systemic sexual abuse of children at the hands of Hollywood moguls and heavy-hitters. According to Hoffman, he put An Open Secret on Vimeo for free viewing “to commemorate serial predator Harvey Weinstein finally being exposed.”

The movie premiered to a limited theatrical release a few years ago, but the incendiary content of the documentary clearly limited his ability to secure strong distribution as Hollywood bigwigs pushed to marginalize the films reach.

“We haven’t got any offers from major distributors yet because Hollywood doesn’t want to expose its dirty laundry, so we’ve been sitting on this for a while. Now, we want to celebrate the brave women who have exposed Harvey,” Hoffman told the Hollywood Reporter.

“Harvey Weinstein, by the way, is not the only one who has used confidentiality settlements. That’s why more of Hollywood’s behavior hasn’t been exposed. This is the tip of the iceberg,” Hoffman said.

Hollywood star Elijah Wood, in a 2016 interview with the Sunday Times, dropped more truth-bombs, noting how child actors were regularly “preyed upon” by industry figures.

“There are a lot of vipers in this industry, people who only have their own interests in mind,” Elijah Wood said in the interview. “There is a darkness in the underbelly – if you can imagine it, it’s probably happened.”

What Wood is referring to is the immense power of Hollywood elites to control the narrative and quash any allegations of abuse before they ever see the light of day, as seen in the numerous non-disclosure agreements signed by Weinstein’s alleged victims.

Since the Weinstein sex abuse scandal first broke, numerous people from across films, television, music, fashion, and media have come forward with accusations of sexual misconduct or harassment. Just over the weekend, more than 30 women spoke on the record to accuse Hollywood writer-director James Toback of sexual harassment, according to a Los Angeles Times story.

Earlier this month, Westworld actress Evan Rachel Wood suggested in a tweet that pedophilia in Hollywood will be “the next dam to break” in a nod to the aforementioned documentary “An Open Secret”.

This will be the next dam to break. https://t.co/Vqlnyz0IfX

With so many sexual abuse victims coming forward, perhaps the Weinstein scandal will provide the impetus for opening the door to holding these Hollywood pedophiles responsible for their predatory behavior too.

Please share this story in an effort to help ensure these Hollywood pedophiles are exposed and prosecuted!