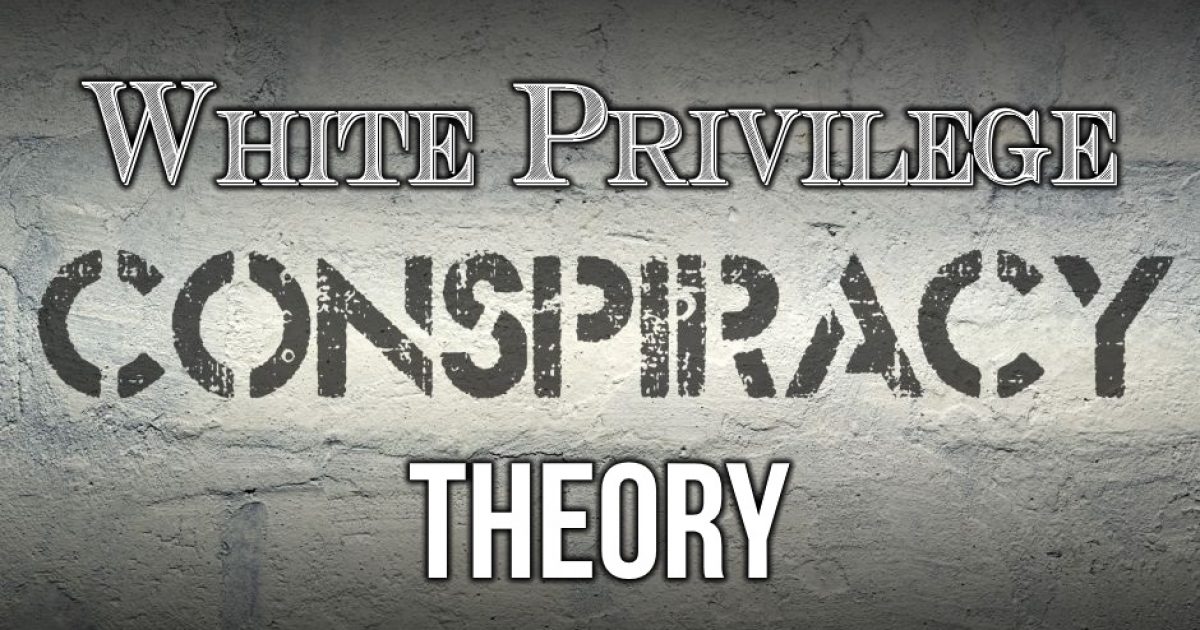 A good friend of mine and I have talked about this issue on several occasions and a response of his to those who complain about the white privilege conspiracy theory is actually a great response that either silences them or sends them over the edge in nonsensical, irrational, emotionally driven drivel.

Here is how the White Privilege Conspiracy Theory is defined by those who hold to it.

On Tuesday, this friend of mine, Jerry Johnson, posted the following video.

A good illustration which undermines the “white privilege conspiracy theory” popularized by cultural Marxists. I didn’t…

“A good illustration which undermines the ‘white privilege conspiracy theory’ popularized by cultural Marxists,” commented Johnson. “I didn’t say great because some of the questions were not thought out well enough, but still, it was good.”

Johnson called the claims of white privilege “conspiracy theories,” and asks those who continue to bellyache about these fictitious claims, “So what? Even if true what do you want me to do about it?”

According to Johnson, their silence is loud.

“Their best answer is usually a schizophrenic dialectical materialism in which utopia can be found if only society guarantees equal results instead of equal opportunity by penalizing those who had both parents, stayed in school (and paid attention), read books, did their homework, never got into drugs, never got pregnant out of wedlock, (think Ben Carson

), and never gave into to victimology (becoming a slave to the state).”

While some people got the point that Johnson was making, at least one wrote, “White privilege is not a theory, it is a fact resulting from the enslavement of Blacks and by the subsequent conditions and legislation that has produced this particular set of circumstances.”

Now, I don’t doubt that many blacks are enslaved to sin, just like many whites, and that over the generations many inner city blacks have passed on those same sins and compounded them upon their children. That has nothing to do with white privilege though, nor does it make white privilege a fact.

As the Second Commandment clearly states:

Thou shalt not make unto thee any graven image, or any likeness of any thing that is in heaven above, or that is in the earth beneath, or that is in the water under the earth. Thou shalt not bow down thyself to them, nor serve them: for I the Lord thy God am a jealous God, visiting the iniquity of the fathers upon the children unto the third and fourth generation of them that hate me; And shewing mercy unto thousands of them that love me, and keep my commandments. -Exodus 20:4-6

The effects of the sins of the people in the inner cities are directly tied, in many ways, to idolatry.

Inner city blacks have not been enslaved for over 150 years in this country, except to big government welfare in many cases, and that has nothing to do with the white man or white privilege.

Additionally, the gentleman commenting about all this being the result of slavery never addresses the fact that it was black Muslims who kidnapped their own people and made slaves of them, not the white man. I am seriously wondering how that fits into “white privilege.”

Furthermore, and some people won’t like this, but understanding that God uses even “bad” things for good, should come into play here. If many of those enslaved blacks had never been brought to the Christian West, they never would have heard the Gospel of Jesus Christ that truly set many of them free, and I believe that the Gospel is the real antidote for what is ailing the inner cities today regardless of the color of skin.

Johnson would later comment, “If you noticed I called it the ‘White Privilege Conspiracy Theory.’ It cannot be proved or disproved. The way I’ve heard it presented by some who affirm the theory is it is a grand white conspiracy used by whites, knowingly or unknowingly, to keep blacks and others down. This is simply NOT true. As a die-hard capitalist, I see only one color…green (meaning dollars.) Many of the issues in the inner-city today are of the communities own making and now they want others to bail them out and they want nothing to change. This is a strategy I disavow strongly.”

“If ‘White Privilege’ means giving my children a head start in life by staying married and faithful to their mother, working to provide for them, making sure they have a proper education, a good work ethic, honoring God in all they do, etc., should they NOT take advantage of that?” he asked.

The struggles of the inner city are not the fault of white people. They are the results, in many cases, of unrepentant sin. If that were dealt with, we might actually begin to see the light shine through and see many inner cities transformed.

I feel great compassion for many of those in those situations, especially the children, but to put the blame on someone else for the actions of the people themselves is just wrong.

Until that time, blaming the white man with a made-up conspiracy theory for all that ails the black community is the wrong approach if you are truly looking for solutions. Otherwise, all one can deduce is that you are looking to make excuses.