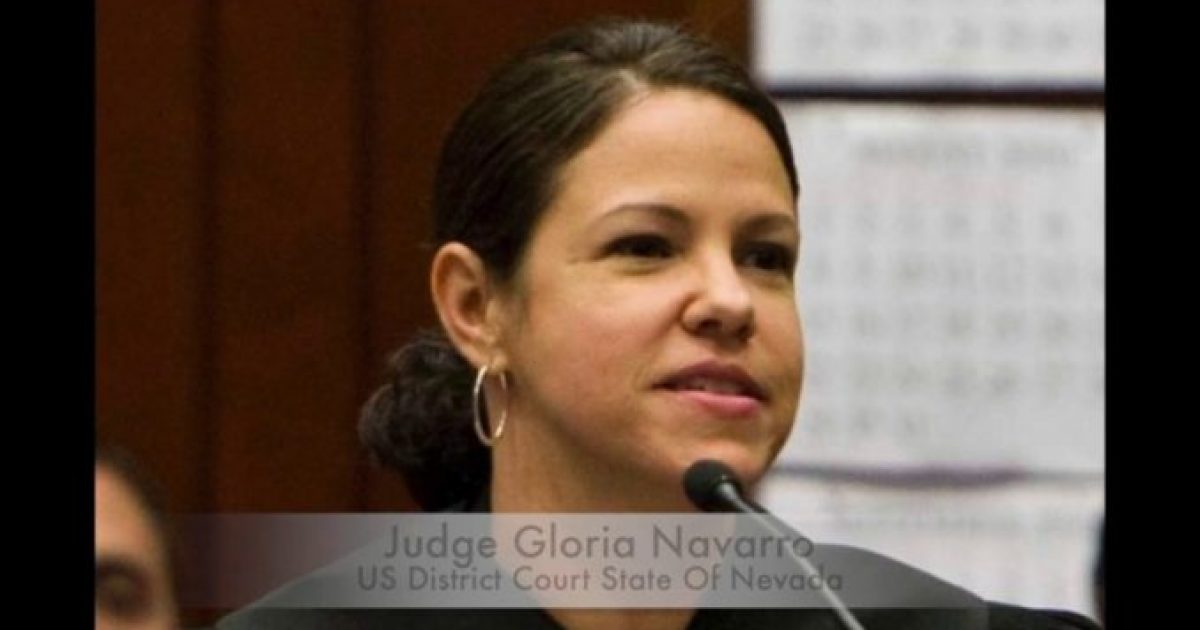 Judge Gloria Navarro continues her cover of a tyrannical central government in their oppression of rancher Cliven Bundy, his sons and others in what can only be called a political prosecution of men who simply pointed to the US Constitution as that which should restrict the central government.

In the latest out of the Bundy Ranch trials in Nevada, Navarro has basically given the government everything it wants while shutting down any real means of law-abiding men from defending themselves.

Our friends at Redoubt News have the latest:

On Tuesday, October 24, Judge Gloria Navarro issued a number of rulings in the Bundy case, granting the government almost everything they asked for while denying the defense almost any means to defend themselves in the upcoming trial.

With a sweep of her pen, Navarro has wiped multiple motions off the docket with arbitrary rulings that only benefit the government.

Shockingly, Navarro even ruled that the prosecution can introduce Cliven Bundy’s 2014 speech in which he reportedly said “I want to tell you one more thing I know about the Negro. . . .” Cliven’s remarks were taken out of context from a wide-ranging discussion of over-regulation, the negative impacts of welfare policy, and benefits of hard work. Many economic studies of welfare policy are in agreement with Cliven’s (poorly worded) remarks. But the publication of Cliven’s speech in the aftermath of the 2014 Bunkerville standoff caused many supporters to abandon him at that time.

The biased judge also ruled that prosecutors may introduce evidence about Jared and Amanda Miller, a married couple who briefly camped near the Bundy Ranch in 2014 area and later went on to kill two Las Vegas police officers. And, said Navarro, prosecutors may introduce claims that Bundy cattle harmed the environment, wildlife, or even sacred Indian artifacts even though the Bundys themselves are barred from even mentioning that the government killed or harmed their cattle.

Astoundingly, Navarro even ruled that the government may play hearsay statements to the jury by now-deceased journalist Michael Flynn claiming that the protest on April 12, 2014 was “illegal.”

This is the same court and prosecution that entertained shutting down testimony of a Nevada governor, US senators and US representatives, along with legal arguments against the constitutionality of the Bureau of Land Management, the unlawful occupation of the central government of public lands that were obtained unconstitutionally, and the stifling of testimony that would point to why the men chose to stand against the tyranny of the central government in the first place in Bunkerville, Nevada in 2014.

Among the things that Navarro granted to Prosecutor Steven Mhyre’s requests are as following:

These are all the same things the prosecution sought to stop the ability of the defense, and free speech I might add, in a previous request to Navarro, a woman who never occupied the bench a day in her life, but was appointed by Barack Hussein Obama Soetoro Sobarkah at the behest of corrupt former US Senator Harry Reid (D-NV).

It is Redoubt News’ assessment that Navarro may be fairer in this trial than in previous ones, and that due to the fact that the oppression of free speech and the ability of defendants to defend themselves was so apparent that even the jury saw it.

However, there is a lot to be concerned over since many of the defendants are represented by court-appointed public defenders, and as such, whether we want to say it or not, they are hired hands of the very government that seeks to prosecute them.

Reporter Pete Santilli pled guilty to a felony charge with time served as his only sentence. Santilli is preparing to tell all of what is going on in the corrupt judicial system in his up and coming The Pete Santilli Show.

Additionally, we reported earlier this week that Special Agent in Charge Daniel P. Love testified and it seems that he implicated that he was being directed by the Obama Department of Justice during the Bundy Ranch standoff in 2014.