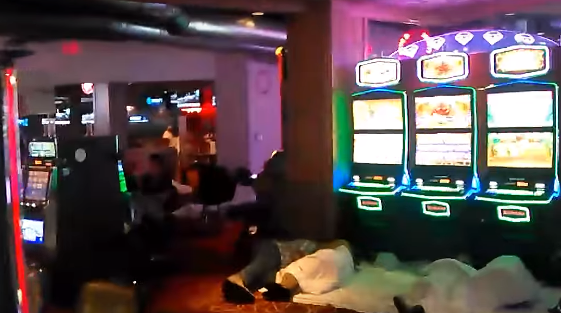 Video footage captured on the night of the Las Vegas massacre shows over a dozen ambulances seemingly removing human bodies from the Hooters Casino and Hotel, once again contradicting the official narrative being fed to the American people by the authorities and a compliant mainstream media.

According to a description of the events by the citizen who filmed the stunning footage, YouTuber Benjami Franks, both he and a friend had just gotten a bite to eat and were heading back to their hotel room at the MGM when they reached Tropicana and Las Vegas Blvd and witnessed the madness of civilians running and police everywhere.

Just minutes later, Franks and his friend made it to their hotel room where they subsequently captured bombshell footage showing at least 17 different ambulances parked outside the Hooters Casino and Hotel during which they were apparently removing bodies from the area.

Franks makes it clear in his video that this was happening specifically at Hooters rather than only at the Mandalay as authorities and the media have continued to claim.

“It must have happened at Hooters dude because they are all showing up there,” Franks continued. “It looks like most of them are at Hooters.”

Take note that the footage shows the ambulances parked outside and as the footage continues you can see them leaving individually as if they had just loaded up victims to get them to the hospital as quick as possible. This fact destroys the claim by some(see sock puppet YouTube accounts) that authorities had simply set up a triage area for victims of the attack at the concert nearby. Another point of contention, that police “sent” everyone in the direction of Hooters, is transparent nonsense, especially when you consider the fact that there is evidence of people LEAVING the hotel wounded as well as running OUT of the lobby.

We are basically being told to ignore footage and evidence that we can see with our own eyes but believe exactly what the authorities and mainstream reporters claim.

As Shepard Ambellas of Intellihub.com noted, “Franks’s footage is absolute proof that the Las Vegas Metropolitan Police Department and the FBI are lying to the general public and have not been forthcoming about all of the events that occurred that night.”

Amazingly, the above video is not the only footage that shows strange happenings surrounding the Hooters Casino and Hotel, as numerous others depict a chaotic scene that somehow included supposedly uninjured people laying in the hotels lobby with white blankets over them, sometimes completely covering their entire body.

The person who filmed the footage can be heard saying that the hotel is on “lock-down” and that there are “bodies just everywhere.” To make matters even stranger, the person who uploaded the footage (or someone who has their account and is pretending to be them) has subsequently responded to comments on the video by claiming that the hotel had given people the white blankets because the lock-down was so long.

One has to wonder, if this was the case why does he say there are “bodies just everywhere?”

Another connection to Hooters, and possibly more proof that some sort of an attack did happen there as well as at the Route 91 concert, a witness recently explained on a now viral podcast what he saw near Hooters on the night of the attack.

Eyewitness Rick Ardito, who was with a group of friends watching the concert when the attack started, described seeing a swarm of people flee Hooters shortly after the initial attack began.

“There was a bunch of people trying to get the hell away from Hooters so we did too,” he revealed. “So we starting running again.”

Ardito also described what a friend of his had witnessed when he became separated from the group.

Ardito also pointed out that at one point one of his group members had witnessed a “SWAT” guy enter Hooters through the back which he thought was suspicious. The scene was fluid and rapidly changing. Nobody could be trusted.

Additionally, eyewitness Gio Rios described hearing shots “coming from the Hooters area while another man filmed the scene around Hooters as the chaos began.

It is important to remember that despite the video evidence presented in this article, we really have’t seen near enough footage when you consider that at least 30,000 people were in the area and only around 30 different people have released footage from that fateful night. It simply doesn’t add up.

Keep in mind, it has already been revealed that the FBI confiscated and then deleted an unknown number of footage from the phones and laptops of eyewitnesses.

On top of that, the FBI was also reportedly involved in a seven man “SWAT” team that swept through the Tropicana Hotel as the attack at the concert was still in progress.

As I reported late last week, “The footage apparently didn’t show a team of law enforcement officers sweeping the hotel over fears of an active shooter, rather it literally caught authorities, as the actual attack was still taking place, storming a hotel to confiscate footage that could easily prove that their official story was complete nonsense.”

The report from TruNews claims that a law enforcement official told them that the team included an FBI officer as well as six LVMPD officers who were drafted at the last minute.

“According to a senior law enforcement official involved in the investigation, the seven man team was comprised of one FBI tactical officer, standing in the back left of the formation, and six officers from the Las Vegas Metropolitan Police Department who were drafted last minute for this impromptu raid,” the bombshell report read.

“Their mission, according to the senior official, was to secure the video footage being captured from the Tropicana’s south facing external surveillance cameras, which were recording an unparalleled high definition view of the massacre from beginning to end.”

That’s right, as Stephen Paddock was still reportedly spraying into the crowd of horrified concertgoers, a tactical team was sent to a nearby hotel to immediately confiscate footage that could prove what actually happened.

At this point it is safe to say that there was clearly something going on at Hooters during the Las Vegas Massacre that included injured or dead people and over a dozen ambulances pulling in and at least some leaving shortly after.

We already know that we have been repeatedly lied to about the attack but as the independent media continues to piece together evidence, the possibility that this was a straight up false flag terror attacks rises exponentially.