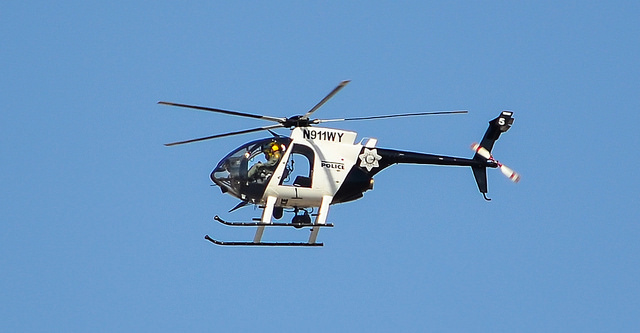 10:34 – 10:36 p.m. – LVMPD aircraft N911WY arrives at Mandalay Bay’s north side (near Paddock’s room) for the first time where it slowly makes its way south toward the Four Seasons rooftop.

10:37 p.m. – The aircraft hovers above the rooftop of the Mandalay Bay Convention Center (possibly scouting for a sniper or shooters nest.)

10:38 – 10:42 p.m. – The aircraft appears to be searching the area and hovering just south of the building toward the Las Vegas Blvd side.

10:45 – 10:49 p.m. – The aircraft flies back over to the Mandalay Bay Four Seasons/Convention Center area for one last look before heading east toward the airport.

10:51 p.m. – N911WY lands in the parking lot of the Harley dealer located at 5191 S Las Vegas Blvd, Las Vegas, NV 89119 where it waits on the hard for the next 8 minutes (rotors spinning) while several mercenaries gear up for what appears to be either a combined aerial/ground assault on the city or some type of aerial counter-sniper defense. One of the men is masked.

Take notice of the M-239 SAW style light machine guns the men are carrying in the following video as N911WY waits in the backdrop.

What element/agency are these men with?

11:04 p.m. – N911WY reemerges above the rooftop of the Mandalay Bay Four Seasons/Convention Center area. For the next six minutes, the helicopter stays just to the south and west of Mandalay Bay where it alternates its location emerging from each end of the building as if the pilot is looking for a suspect on the south and/or west face of the building.

For the most part, over the next few minutes, the helicopter remains lower than the roofline of both the Delano and Mandalay Bay. At one point the aircraft appears to hover exactly over the same location where a taxi cab driver captured the sound of loud fully-automatic gunfire and what appears to be the reflection of a muzzle flash in her rearview mirror on video.

11:10 p.m. – N911WY hover’s near Paddock’s room on the north side of the building before taking one last sweep of the south side.

11:15 p.m. – The aircraft abruptly heads north along Las Vegas Blvd toward the Bellagio.

11:16 p.m. – At this point, N911WY is north of Tropicana Blvd where it slowly searches the area, eventually working its way south by Hooters then toward the venue minutes later.

11:31 p.m. – N911WY completes the mission and returns to the Harley dealer where it lands (possibly unloads over the next 3 minutes.)

The full animated version can be seen here: