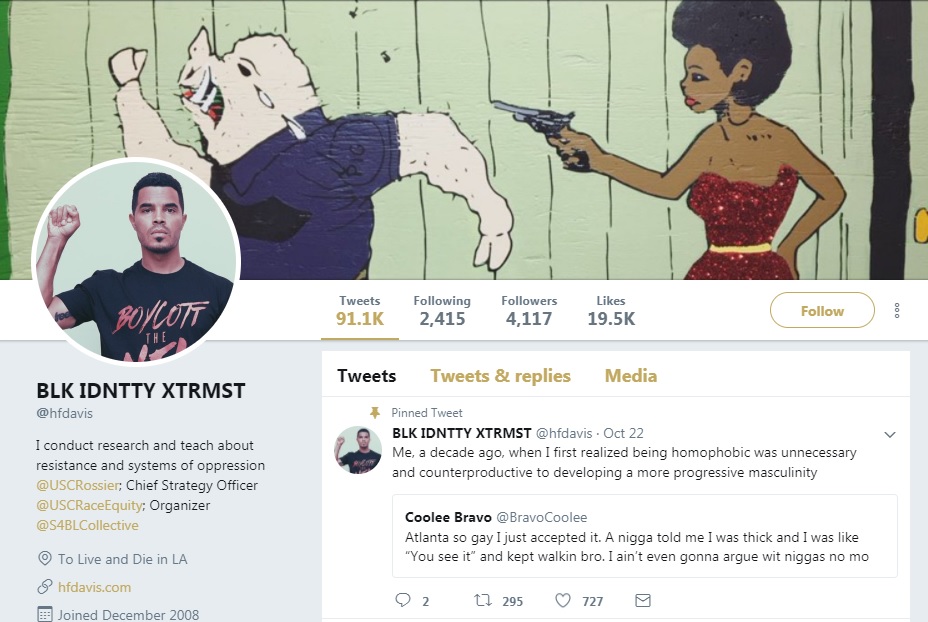 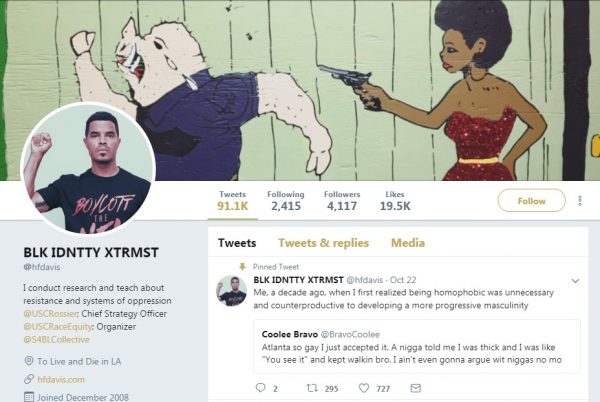 The University of Southern California professor who said “whiteness” “must be by any and all means, destroyed,” said Wednesday that he stands behind his statements.

In an email to The College Fix, self-described “black identity extremist” assistant professor Charles H.F. Davis wrote: “Yes, I stand behind my statements against white supremacy, heterosexism and homophobia, and patriarchy as systems of oppression, all of which are both embodied and advanced by the violent and dehumanizing rhetoric and policy decisions of the current President of the United States.”

“Statements made by our faculty members are not endorsed by the University; indeed, we sometimes profoundly disagree with the statements,” they said in a statement to The College Fix. “Nevertheless, we protect their right to express those views. However, USC does not condone violence or threats of violence in any form.”

As The College Fix reports:

Davis told The Fix that he refutes InformationLiberation’s accusation that his Twitter account includes “anti-white hate” and promotes violence against law enforcement, saying it is a “perfect and intentional misrepresentation.” However, the professor did not deny harboring anti-police and anti-whiteness sentiments.

“To be clear, I am decidedly against whiteness as a social and political ideology, which systematically marginalize and disenfranchise people of color from opportunities for societal advancement,” he said. “In addition, I am against the institution of policing, which has historically and continuously enacted racial terror, sexual violence, and economic exploitation against racial minorities, women and LGBTQ communities, and economically disadvantaged working-class people.”

It’s a “perfect and intentional misrepresentation” to say he pushing “anti-white hate” – he just hates everything white people have created and wants to see it destroyed because we thrive on “marginalizing and disenfranchising” people of color, understand?

Referring to his background photo on his Twitter account, Davis said he thinks photos that show resistance to police violence are necessary and said the photo of a black woman shooting a pig in a police officer’s uniform “is an intentional political statement.”

Davis said he defines whiteness as an ideology of racial superiority based in racist practices and beliefs and added the concept “is neither synonymous with nor exclusive to white people.” However, he said all white people reap in its benefits and that it must be eradicated because it “allows for both passive and active forms of violence to be enacted upon people of color, many of which result material and potentially fatal consequences.”

Indeed, it takes a high level of wokeness to realize black people can be white supremacists. Davis is not against white people, he’s just against our very essence – our “whiteness” – which he and Marxist professors much smarter than himself get to arbitrarily define without our input.

Thanks for clearing all that up, Professor.