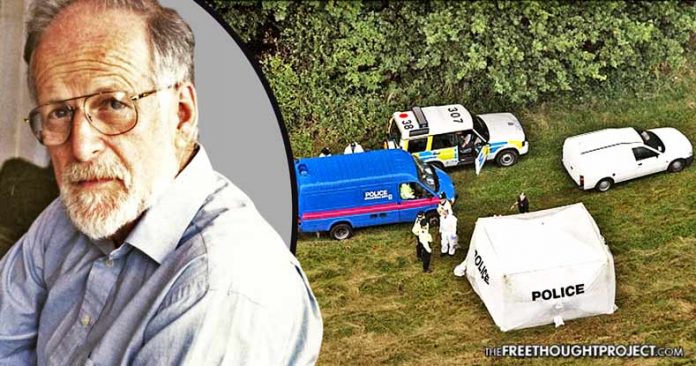 This past week, the Kelly family decided to unearth the corpse of their beloved family member and cremate his remains. In 2003, Dr. David Kelly, formerly a United Nations (UN) weapons inspector and member of the Ministry of Defence (UK), walked into the woods near his home, ate a couple dozen opiates, slit his left wrist, and died.

That was the official cause of death, but conspiracy theorists believe Kelly was killed by members of his own government. Even now, after 14 years, many activists say an official coroner’s inquiry into his death should take place. But it’s what Kelly said, or was reported to have said, which some believe got him officially assassinated, and his death made to look like a suicide.

After 9/11/01, just as the United States needed Iraq to possess weapons of mass destruction (WMDs), so did the United Kingdom need the Middle Eastern county to possess them in an effort to get its people on board with a preemptive attack on a sovereign nation. Kelly was a chemical weapons experts employed by the United Nations to inspect Iraq’s chemical weapons programs.

In 2002, in an off the record interview with the BBC’s Andrew Gilligan, Kelly told reporters the dossier the UK Prime Minister Tony Blaire used to justify the invasion of Iraq was “sexed up” and that he had personally inspected the supposed mobile chemical weapons plants and stated they were nothing more than helium factories for filling balloons.

They are not mobile germ warfare laboratories. You could not use them for making biological weapons. They do not even look like them. They are exactly what the Iraqis said they were – facilities for the production of hydrogen gas to fill balloons.

As an employee with the Defense Department, he was allowed to speak with members of the media but only on the condition of anonymity and was often referred to as “a scientist” with the government as the media’s confidential source.

All that changed when he started being more vocal about his doubts that Saddam Hussein’s military was capable of launching a battlefield chemical weapons attack within “45 minutes” of being given the order. He admitted the country probably did possess some chemical weapons but it was his opinion they were not capable of making them battlefield ready in such a short period of time.

After being outed by the media as the scientist making those controversial claims (implying the government was using WMDs as a weak argument for going to war), he was called before an official government inquiry and grilled. He was forced to answer questions related to which reporters he’d spoken to and what he’d actually communicated.

Two days after being in the literal hot seat (the air conditioning had to be turned off because Kelly was such a soft spoken person), the microbiologist walked off into the woods and killed himself. And that’s when the conspiracy theories were launched, made possible by the government’s attempt at secrecy, even going so far as to classify the details of his death for 70 years.

Those critical of the events surrounding the death of the chemical weapons expert and member of the military pointed to several facts in the case which remained unexplained;

Even a group of doctors were seeking legal recourse to be allowed to investigate Kelly’s death. But what made his family dig up his body last week and cremate his remains was a consequence of vandals, according to those close to the family who said that the many conspiracy theorists visiting his grave and holding vigils was unnerving for them. They said it was a desecration. At any rate, any clues found in his corpse as to how he died, if he was killed, why he died, have all been obliterated.

But it is likely Kelly’s cremation will not be the end of the ordeal as activists are still determined to get to the bottom of why the whistleblower would feel the need to kill himself and make such a mess of his own suicide. It’s ultimately not the way a scientist would likely have taken his or her life.

In 2007, Norman Baker wrote an article written for the DailyMail titled, “Why I know weapons expert Dr. David Kelly was murdered, by the MP who spent a year investigating his death.” In it, Baker theorized Kelly was either murdered by his own government, by Saddam loyalists, Mossad, South Africans or even by the Central Intelligence Agency, among other possible bad actors. He concluded:

This now infamous “45-minute claim” fed through to the dossier of intelligence which was used as the justification for our involvement in the invasion of Iraq. It was this dossier, and the 45-minute claim in particular, that David Kelly challenged in his crucial interview with the BBC. By doing so, did he sign his own death warrant?