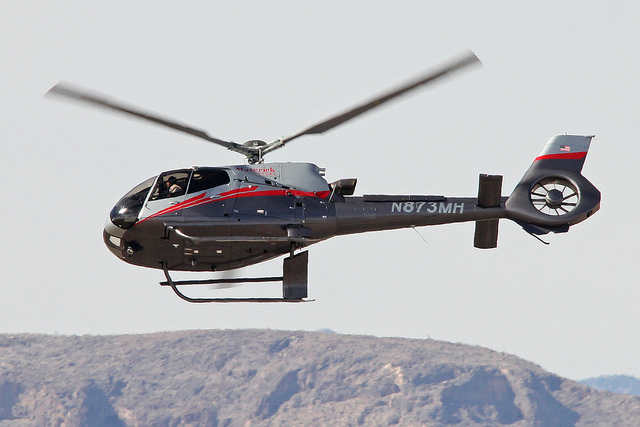 What if the entire Oct. 1 operation was conducted via an advanced air assault? Flight records show it could be likely

Preface: I want to make clear that I am in no way saying that this scenario for sure happened. I am merely reporting on data which I’ve found after scouring hundreds of hours of information, flight data records, and video footage captured between the hours of 9:40 and 10:30 p.m. on the night of October 1 (i.e. If it happened this is how it occurred.)

LAS VEGAS (INTELLIHUB) — Flight records, aircraft transponder data, and video footage all reveal that covert air assault and EXFIL operations may have transpired on the night of the massacre.

The choppers are affiliated with Mustang Helicopters, Maverick Helicopters, and Maverick Aviation Group, all of which are owned by a 68-year-old Army veteran named Greggory Rochna. In fact, according to Vegas INC, Rochna owns 47 Eco-Satr-130s, which “are among the best touring helicopters on the planet,” costing “$3.2 million” each. They use a quiet tail-rotor design which helps to quell unwanted noise generated by the aircraft’s prop-wash, as Jake Morphonios reported in a video which he posted to YouTube on Oct. 13 while conducting his multi-part “Las Vegas shooting investigation.”

After their departure, the three choppers flew to the north through the city in a tight line formation before circling back to the south where they abruptly stopped and hovered directly over the Mandalay Bay/Delano property 7-minutes later. In fact, N848MH hovered directly over a portion of Mandalay Bay’s rooftop just to the west of the Events Center Bar for several minutes (between 9:48 and 9:50 p.m.) before all three aircraft transponders went dark right at 9:50 p.m., just 15-minutes before the shooting started.

To give you a better feel for where the helicopter was (along with 2 others) I have provided a map of the MGM-owned property.

The venue which hosted the Route 91 Music Festival is located just 824 yards (2,705 ft.) away from where the three choppers were positioned in a solid hover before their transponders lost signal or were manually turned off.

The following image illustrates the vantage point the three helicopters would have had over the concert venue from the locations in which they were hovering at the time.

In theory, the choppers would each have had to offload two assailants (a total of six). Two of which would have taken sniper positions right away (one on the lower north roof under Stephen Paddock’s room and one on the northeast corner of the Convention Center roof) while the other element of four stormed the casino floor, making their entrance through the parking garage.

The three choppers (N854MH, N848MH, and N858MH) would have had to hold there positions or stay in close proximity to the Mandalay Bay for the next twenty minutes until all of the ended at 10:15 p.m. That’s when the two snipers would have made their EXFIL off the roof via chopper and returned to base with all three craft approximately three-minutes later around 10:18 – 10:19 p.m.

Hypothetically, the following image depicts what the shooters in the helos would have seen from their aerial positions as the three aircraft maintained a flat hover. The assailants would have been firing unmounted M-249 belt-fed SAWs due to the fact that mounted weapons would have been too hard for the three choppers to hide from law enforcement if an encounter were to occur upon their approach or getaway.

And although 20-minutes seem like a long time for three helicopters to be hovering in the sky behind Mandalay Bay, its not. With the aircraft running lights off and the quiet technology the choppers would have been virtually unnoticeable in the night sky.

Keep in mind, the four-man element would still be on the property at this point where they would be traversing their way up to the rooftop of the Delano, inside the hotel’s interior, using a series of inner-connected hallways and stairwells in order to make a planned EXFIL from the southwest rooftop of the Delano Hotel at 10:24 p.m. in an entirely different helicopter altogether, just four minutes before the Las Vegas Metropolitan Police Department helicopter (N911WY) arrived in the vicinity for the first time following the gunfire.

To reiterate, the helicopter that arrived over the rooftop of the Delano and hovered for over one-minute was a separate helicopter than the first three.

The image below shows the location where the mystery aircraft first appeared while heading due north toward the Delano Hotel where it slowed then stopped over the roof.

You see, the aircraft that was displaying the call sign “SWA4119” between 10:21 and 10:22 p.m., which had first emerged on radar at 10:21, absolutely can not be a passenger jetbecause the actual flight data confirms that the aircraft slowed to a stop then changed its course abruptly to a due north heading before proceeding to hover over the Delano in a very specific spot for approximately one-minute (i.e. the craft in question was, in fact, a helicopter because jets simply cannot hover or change speed and course with such intensity.) This means that the operators of the craft were intentionally transmitting a fictitious call sign before going dark (invisible) from radar altogether.

The following image shows the position of where the mystery aircraft was when it was in a solid hover for one-minute.

After EXFIL, the mystery helicopter (previously masked as “SWA4119”) departed to the west where it looks like it may have met up with a pack of seven other choppers, all of which are currently registered to Mustang Leasing LLC.

All seven had departed from the vicinity of 6075 S Las Vegas Blvd, just minutes before, at 10:12 p.m., again, as if it was all part of a highly coordinated plan.

After the seven choppers departed their base they looped up and around the city where upon their return they were directed to stay far west of the strip due to the fact that the situation was still active.

The seven choppers were flying southward at the time in a perfect line formation and that’s when the aircraft that was masking itself as “SWA4119” with its transponder off at the time that was hovering above the Delano may have made a covert merger and inserted itself directly into the line of seven other choppers which were on their way back to base in order to mask its return. At that point there would presumably be a line of eight Mustang Leasing LLC helicopters, seven of which were captured on radar headed back to base where they all landed a few moments later.

Shockingly, video footage captured on a GoPro camera during the shooting coincides with flight data and reveals what appears to be multiple muzzle flashes coming from several different elevations in the sky between the Mandalay Bay and the Delano Hotel.

Flashes can be seen emitting from the exact spot the Mustang Leasing LLC choppers N854MH, N848MH, and N858MH were captured on radar hovering just 10-minutes prior to the shooting when their transponders all simultaneously stopped transmitting.

I also must point out that according to FAA records nothing should be in the airspace beyond the two buildings at that time and that there is no structure beyond the buildings which would warrant shooting from that elevation (i.e. the flashes are occurring in free air.)

Could the choppers have been lurking back there, beyond the hotels, for the entire 20-minutes?

Again, I want to make it clear that this is all just a theory which the data seems to support. If true, it would make for one hell of an operation. The assailants would likely have fallen back to the airport where they would have departed in another aircraft, possibly multiple aircraft, possibly private.

Could it have been part of a well-orchestrated heist or was the massacre just a blatant attack full-scale attack? You be the judge.

You can watch and review the full, uncut, raw, video here:

Withal, I would like to point out that there were likely other shooters (elements) on the ground at various locations throughout the city that night.

Additionally, I would like to thank Youtuber “Montagraph” for alerting me to the possibility that an air assault could have taken place. His Oct. 11 video titled “From The Air” prompted me to do further in-depth research on the subject.