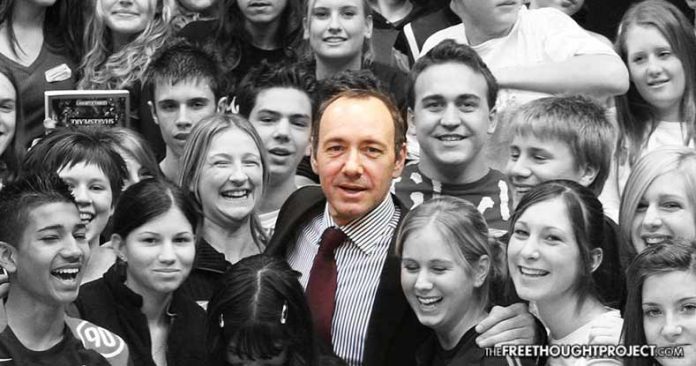 Actor Kevin Spacey became the latest alleged sexual predator in Hollywood on Monday after he was publicly accused of attempting to sexually assault a 14-year-old boy. Not only is this not the first time Spacey has faced such allegations, but it calls his past into question, which includes his foundation that specifically works with children.

The Kevin Spacey Foundation is an organization of “mentors, advocates and educators” who work with hopeful emerging artists to “discover, fund and co-produce transatlantic musical, dance, theater and film projects,” according to its website, which features a photo of Spacey surrounded by eager children hoping to break into the entertainment industry.

A video of Spacey promoting the foundation was published on YouTube in January 2015. In it, Spacey said he was approached by actor Jack Lemmon when he was 13 years old at an acting workshop. The meeting led to a connection between the two, and when Spacey was 25, he landed the role of Lemmon’s son on the Broadway production of Long Day’s Journey Into Night.

As Spacey was making his name on Broadway, another actor was doing the same on the play Precious Sons. Anthony Rapp was just 14 years old at the time, and he is now speaking out and accusing Spacey of attempting to sexually assault him during an after party for the two casts in 1986.

“He picked me up like a groom picks up the bride over the threshold. But I don’t, like, squirm away initially, because I’m like, ‘What’s going on?’ And then he lays down on top of me…He was trying to seduce me…I don’t know if I would have used that language. But I was aware that he was trying to get with me sexually.”

While Rapp’s story of his encounter with Spacey may influence parents to keep their children as far away from the Kevin Spacey Foundation as possible now, this is not the first time the actor’s name has been among a list of sexual predators.

In January 2015, at the same time Spacey was promoting his foundation and searching for eager children, a report was published revealing that Spacey’s name was alongside former President Bill Clinton on the logs of visitors who flew on the “Lolita Express.”

The private jet was owned by sexual predator and wealthy Wall Street hedge fund manager Jeffrey Epstein. He was found guilty of sex-trafficking girls as young as 12 years old to facilitate rape parties with his wealthy friends.

Spacey and Clinton appear to be just two of those “wealthy friends” who received favors from Epstein. While Spacey flew on the plane during a trip to Africa, Clinton’s name was listed on the passenger logs 26 times between 2001 and 2003, revealing that he flew on the plane at least once a month during the two-year period.

While Epstein spent just 13 months in prison and home detention for the conviction of solicitation and procurement of minors for prostitution, the close friends with connections to his child sex-trafficking operation faced no ramifications. In the case of Kevin Spacey, he continued to promote his foundation, and to encourage parents to let their children work with him.

“The Kevin Spacey Foundation is an opportunity for me to continue the kind of work that we’ve been doing in education and with emerging artists,” Spacey said in the promotional video. “I’ve set it up to support young actors, writers, producers, directors with the passion and the potential to succeed in the ever-competitive business of film and theatre.”

The allegations against Spacey that were made public by Anthony Rapp occurred over 30 years ago. That, coupled with Spacey’s involvement with Epstein and Clinton, raises questions about how many other young actors Spacey has victimized over the years, and whether the infamous “Help! I’ve escaped from Kevin Spacey’s basement!” line from Family Guy had a much deeper meaning than the public realized in 2005.