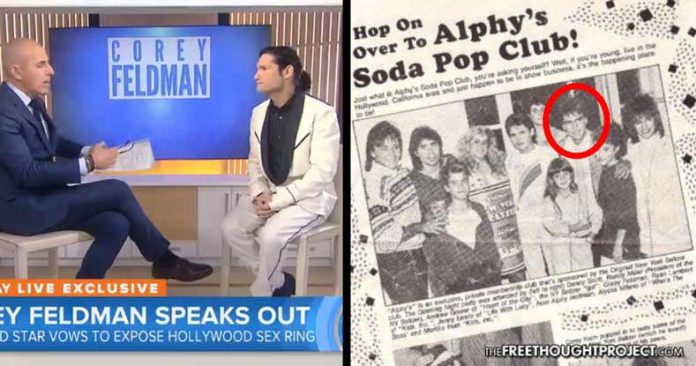 As the world begins to see Hollywood’s dark underbelly for the first time, those who attempt to downplay or otherwise cover for the predators are being exposed as complicit in the abuse. Because their facade is collapsing, those in the mainstream who could once look the other way in the face of abuse or smear the alleged victims are now frantically attempting to maintain the narrative.

On Monday, Kevin Spacey was accused of sexually assaulting a 14-year-old boy. While he claimed he didn’t remember it, he did apologize, noting that it likely could’ve happened. In this same apology, Spacey came out of the closet as gay.

Upon the news of Spacey’s admission via apology for child sexual abuse, the Praetorian Guard, aka the mainstream media, quickly came to his defense. Massive headlines from nearly every mainstream outlet ran with the news about Kevin Spacey—but not the news he apologized for allegedly sexually assaulting a child. The media conveniently hid the pedophilia allegations behind Spacey’s gayness—and then blamed everyone else for it, saying people hate his gayness.

Running with the headline “Why are people angry about Kevin Spacey coming out?” the BBC attempted to downplay the allegations of sexual assault and instead attempted to paint those who want answers on those allegations as anti-gay.

The BBC was not alone either. Reuters downplayed the sexual assault allegations too. When they ran their piece on the apology for Spacey allegedly sexually assaulting a boy—which was made in the exact same post about being gay—Reuters chose to run the headline “Actor Kevin Spacey declares he lives life as a gay man.” The reputable news source conveniently glossed over the fact that he apologized to Anthony Rapp for lude and lascivious contact with the then-14-year-old boy.

In fact, the first two paragraphs of the story say nothing at all of the apology.

After years of refusing to address rumors about his sexuality, Oscar-winning actor Kevin Spacey said on Sunday he has chosen to live his life as a gay man.

Spacey, 58, who won Oscars for “The Usual Suspects” and “American Beauty,” made the declaration in a post on Twitter.

Multiple other outlets including ABC, NBC, the NY Post, etc all ran with similar headlines drawing only the attention to Spacey’s new declaration of homosexuality and not the apology for that “horrifying” night of alleged child abuse. Just as the mainstream media accused people of hating Kevin Spacey’s gayness, they also went on to victim shame Corey Feldman. However, Feldman is a seasoned vet of corporate media’s shaming as he was publicly lambasted by Barbara Walters in 2013 on an episode of the View and in the interview on Monday, he owned The Today Show host, Matt Lauer.

Like many of the people who haven’t looked past the surface of coming forward with sex abuse claims against the elite, Matt Lauer attempted to grill Feldman for not immediately giving up the names of his abusers.

However, as TFTP reported, and as Feldman goes on to explain, he did name his abusers—to the police—and they did nothing.

“I’ve told the police,” says Feldman. “In fact, if anybody wants to go back to 1993, I sat there with the Santa Barbara police, I gave them the names, they’re on record. They have all of this information but they were scanning Michael Jackson. All they cared about was trying to find something on Michael Jackson.”

Since this interview aired, the Santa Barbara police came forward to claim they have no such names. However, it was leaked years ago and published online.

Going further, Feldman explains just how deep the fear and control go when he noted that “thousands of people in Hollywood who have this same information. Why is it all on me? Why is it that if I don’t release the names in the next two months, six months, a year, I’m the bad guy?

While we should all remain entirely skeptical of all information without having direct evidence, these allegations have deep roots.

When looking into this “Soda Pop Club,” TFTP found Alphy’s Soda Pop Club, which was—as Feldman noted—promoted in teen magazines and catered only to underage child actors in Hollywood. It was owned by Alphy Hoffman.

In Feldman’s biography “Coreography: A Memoir,“ Feldman identifies his abusers using pseudonyms. In his book, Feldman says, “Ralph Kaufman’s club was a private social space for famous teens.” Is Kaufman Hoffman? If he is, Feldman said this about him in his book as well:

Notice how Corey Feldman’s name is conveniently not on that list. However, we found the following image, showing Feldman at the club—pictured next to Hoffman. If Feldman was out for the long con, like some folks are saying, he’s sure gone to great lengths to do so.