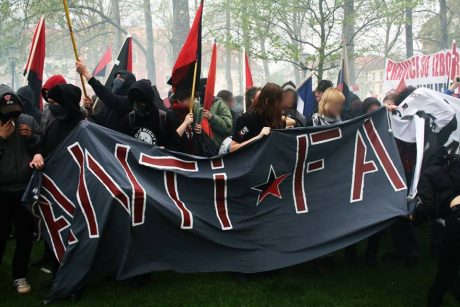 Are we about to see chaos in the streets in major cities all over America?  Antifa and other radical leftist groups are promising that a series of protests will begin on November 4th that will never end until “the Trump/Pence regime” is “removed from power”.  And as you will see below, Antifa has openly and publicly embraced violence and the Department of Homeland Security says that they have engaged in domestic terrorism.  Hopefully these “protests” will fizzle out after a few weeks, because political organizations that believe in “the necessary use of violence” have no place in our society.

Amazingly, there are still some out there that are claiming that the radical left is not planning anything for November 4th.  The following comes directly from refusefascism.org, which is one of the key websites for Antifa and other radical leftist groups…

That sounds pretty serious to me.

Hopefully they are not able to back up their words with actions.

I have seen various lists of cities were Antifa protests are planned floating around the Internet, but I felt that it was important to go right to the source.  According to refusefascism.org, this is the official list of cities where activists will be gathering on November 4th…

Let us hope that none of these events become violent, but we have seen violence from Antifa on numerous occasions since the election, and this is an organization that says that “the use of force is intrinsic to their political philosophy”.  The following comes from a startling article in the Hill…

Needless to say, the Hill is not exactly a conservative publication.

At this point everyone knows what Antifa is all about, and my hope is that Republicans and Democrats will stand united in denouncing their violent tactics.  For example, just consider what happened at a recent event in Minnesota…

Hundreds of masked protesters at the University of Minnesota recently conducted a violent protest against a speech by conservative activist and YouTube commentator Lauren Southern.

Fights erupted outside the event, forcing police to intervene. Members of the conservative group Collegians for a Constructive Tomorrow (CFACT), which hosted the event, say they were “tagged” and set upon by masked antifa activists who spat on them, hit them, shoved them off bicycles and maced them.

These crazed lunatics actually believe that Donald Trump is a modern day version of Adolf Hitler, and therefore they believe that the use of violence is justified in order to prevent a new “Nazi regime” from taking over America.

Of course that is complete and utter nonsense, and in their zeal to attack conservatives Antifa is actually becoming what they say that they hate.  If anyone can be characterized as “brownshirts”, it is the Antifa thugs that are willing to use violence against those that would dare to disagree with their radical leftist agenda.  According to Politico, their increasingly violent tactics have caused the Department of Homeland Security to officially classify their activities as “domestic terrorist violence”…

Are you starting to understand how dangerous these guys are?

And there is actually evidence that radical leftists have been cultivating ties with Islamic terrorists in the Middle East.  The following comes from a report that was published by the Daily Mail…

A secret FBI investigation of the violent ‘resistance’ movement on college campuses against President Trump has led to an alarming discovery—the collusion between American anarchists and foreign terrorists in the Islamic State and Al qaeda, according to a confidential ‘Informational Report’ by FBI field offices.

‘There is clearly overwhelming evidence that there are growing ties between U.S. radicals and the Islamic State, as well as several [ISIS] offshoots and splinter groups,’ stated the FBI field report, which was delivered to Acting Director Andrew McCabe on July 11, 2017, and which is being published for the first time in my new book All Out War: The Plot to Destroy Trump.

An atmosphere of violence and fear creates an environment in which many conservatives are afraid to speak out.

In fact, a survey that was just released discovered that 58 percent of Americans “believe the political climate prevents them from sharing their own political beliefs”…

The Cato 2017 Free Speech and Tolerance Survey, a new national poll of 2,300 U.S. adults, finds that 71% Americans believe that political correctness has silenced important discussions our society needs to have. The consequences are personal—58% of Americans believe the political climate prevents them from sharing their own political beliefs.

Democrats are unique, however, in that a slim majority (53%) do not feel the need to self-censor. Conversely, strong majorities of Republicans (73%) and independents (58%) say they keep some political beliefs to themselves.

But this is not what our founders intended.  Freedom of speech is in the Bill of Rights for a reason, because without it we would be in a world of trouble.

As the radical left becomes more violent, we need to become bolder than ever.  As for me, I will continue to speak out about what we need to do to turn this country around…

No matter how crazy they get, we can never allow Antifa to intimidate us.

We are in a battle for the future of America, and the fate of our children and our grandchildren is hanging in the balance.  The radical left must not win, because if they do they will transform our society into a totalitarian socialist “utopia” that will look nothing like the nation that our forefathers originally founded.