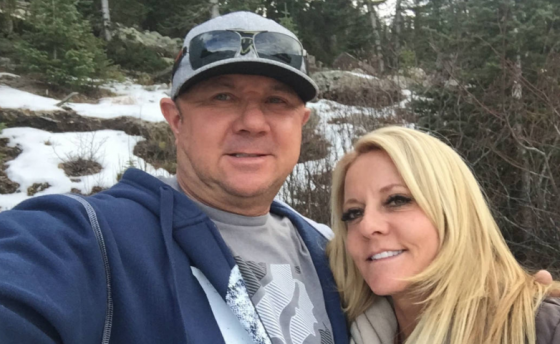 Just two weeks after the Las Vegas mass shooting, a couple who survived the massacre was killed in a fiery car accident.

Dennis and Lorraine Carver died after their 2010 Mercedes crashed into a metal gate and burst into flames near their home in Riverside County, California, on October 16, according to a statement from the Riverside County Fire Department.

The couple’s younger daughter, 16-year-old Madison Carver, heard a loud bang outside her window that night, reports the Las Vegas Review Journal. When she ran down the street and turned the corner, she saw her parents’ vehicle – and it was engulfed in flames.

Dennis, 52, and Lorraine, 53, had died together less than half a mile from their home.

According to the fire department, the Carvers crashed into a metal gate outside their community at 10:50 p.m. on the 20000 block of Avenida De Arboles. It took firefighters nearly an hour to completely put out the fire, the department said in a statement.

The couple’s car careened off the road and struck a cinder block column, ripping off the rear axle and rupturing the gas tank, according to Officer William Strom of the California Highway Patrol, which is overseeing the investigation. The car then spun and went head on into another cinder block column, then rolled and burst into flames, Strom said. The Carvers were the only people in the car and the cause of the crash was unknown.

The two were pronounced dead at the scene and were identified by the Riverside County coroner.

Moments before Stephen Paddock opened fire on a crowd of concertgoers at the Mandalay Bay resort in Las Vegas, the Carvers had been line dancing and singing along to country performer Jason Aldean.

When Dennis realized they were under fire, he jumped on top of Lorraine to shield her from the bullets.

During the third or fourth pause in gunfire the two got up, hand in hand, and started running. They ran for their lives and didn’t stop until they got out uninjured, Brooke Carver, 20, the couple’s older daughter, told the Las Vegas Review Journal.

After surviving the shooting, the couple went on to spend the next two weeks more in love than ever with each other and with life, said Brooke.

“After the shooting, they heard from all of the people they cared about most. They were so happy. The last two weeks of their lives were really just spent living in the moment.”

During the chaos of the shooting, Dennis lost his phone. How it was found has not been reported, but according to Brooke, a Las Vegas FBI agent promised to mail the phone to him.

A week after the crash, the phone arrived.

“When we turned it on, all his photos and messages were still there,” Brooke said. “This is how we know they’re looking down and watching over us.”

The Carvers are not the only Las Vegas shooting survivors to die within a month after the massacre. On October 9, Kymberley Suchomel, 28, passed away in her home. Suchomel’s cause of death has not been publicized, but her family and friends reported that she had epilepsy and had recently suffered three focal seizures.

Five days prior to her death, Suchomel reportedly wrote a lengthy Facebook post (now deleted from Facebook, but available here) that appears to contradict the lone wolf shooter narrative provided to the public from law enforcement.

Infowars reported that one of Suchomel’s longtime friends, who asked to remain anonymous, provided them with screenshots of conversations in which she indicated planning to “organize a group of survivors” in order “to piece things together.”

Many questions about the Las Vegas shooting remain unanswered. The “official” narrative has changed numerous times, many witness accounts of the incident do not match what we are being told by investigators, and there are multiple claims that there was more than one shooter involved.

A crowd of nearly 22,000 people attended the Route 91 Harvest Festival on October 1, so the deaths of three attendees who survived the mass killing might seem like a small number. But one can’t help but wonder if the deaths of the Carvers and Suchomel are somehow related to the Las Vegas massacre and what the three witnessed that tragic night.