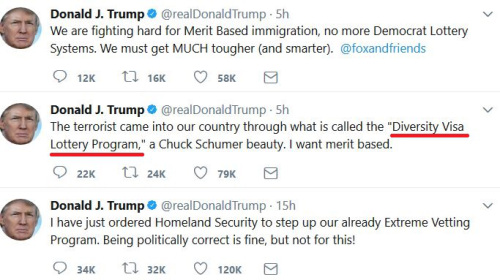 The following post originally appeared at Fellowship of the Minds.

Tuesday afternoon in New York city, shouting “Allahu Akbar!,” a man drove a truck down 17 blocks of the West Side Highway bike path near Ground Zero, killing 8 people and injuring another 15.

Only when he crashed into a school bus, injuring two kids, one critically, did the terrorist stop. The man brandished two fake guns before being shot in the stomach by an NYPD officer. He survived the gun shot and is out of surgery. ISIS flags and notes pledging his allegiance were found in the truck. (Daily Mail)

The man is Sayfullo Habibullaevic Saipov, 29, an Uzbek who immigrated to the U.S. in 2010.

Thanks to a tweet from President Trump early this morning at 4:24 AM (!), we now know that this Muslim terrorist was admitted into the United States under a little-known program called Diversity Immigrant Visa or lottery, the architect of which is Senator Chuck Schumer (D-NY).

In other words, Saipov was not admitted into the U.S. on merit, but simply because he fit Democrats’ PC notion of “diversity,” as if the United States, with 66.2% of the population being non-Hispanic whites, 15.1% Hispanic, 12.6% Black and 5.1% Asian in 2015 isn’t already diverse.

One can argue that the Diversity Visa Program is the Coudenhove-Kalergi plan for America.

The lottery is administered by the Department of State and . . . makes available 50,000 permanent resident visas annually and aims to diversify the immigrant population in the United States, by selecting applicants from countries with low rates of immigration in the five years prior.

Just minutes ago, the Wikipedia entry on “Diversity Immigrant Visa” said that the Diversity Visa Program “is also known as the Schumer program, after its sponsor” Sen. Chuck Schumer. But now that sentence is deleted from the entry.

Attempts had been made by Congress to abolish the program: