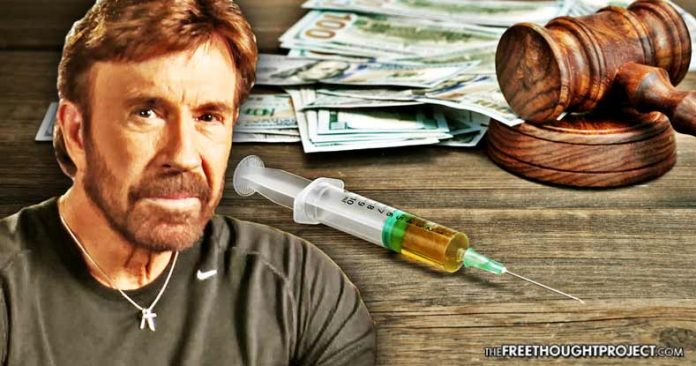 On November 1, Chuck Norris and his wife Gena Norris announced a massive lawsuit against eleven different drug companies, including McKesson and Bracco, claiming they are responsible for nearly killing Gena.

“Unfortunately, litigation is the only course of action we can take to hold the drug companies accountable for threatening the lives of so many innocent people who undergo MRIs,” Gena said.

Gena and I have been in the news recently because of the gadolinium poisoning she received through her Magnetic Resonance Imaging, or MRI, “a diagnostic technique that uses magnetic fields and radio waves to produce a detailed image of the body’s soft tissue and bones.”

We’re not overlooking the good MRIs can do. We’re speaking out against the dangers of gadolinium use in MRIs.

Gadolinium-based contrast agents, or GBCAs, are injected in about a third of 60 million MRIs performed annually – 30 million in the U.S. alone (that’s one in 10 Americans), including children.

Gadolinium is a heavy metal chemical agent that is injected to enhance the images of a MRI. It’s not naturally found in the human body. Its proponents say it is always expelled from the body, primarily through the kidneys. But studies have shown it can be retained in the brain, bones, skin and others parts of the body.

“These companies continue to say that there is no link between gadolinium and adverse events, even though the evidence is overwhelming that this heavy metal stays in the body for years, rather than hours,” said Gena.

To treat her condition, the Norris family has had to seek alternative care outside of mainstream medicine. The treatment they sought to remove the gadolinium from her body, which is not yet approved by the FDA to treat gadolinium poisoning, is chelation therapy.

Chelation therapy is a chemical process in which a synthetic solution-EDTA (ethylenediaminetetraacetic acid)-is injected into the bloodstream to remove heavy metals and/or minerals from the body. Chelation means “to grab” or “to bind.” When EDTA is injected into the veins, it “grabs” heavy metals and minerals such as lead, mercury, copper, iron, arsenic, aluminum, and calcium and removes them from the body. Except as a treatment for lead poisoning, chelation therapy is controversial and unapproved.

Gena and Chuck are represented by Brooks Cutter and Todd Walburg of Cutter Law in California who were present in September when the U.S. Food and Drug Administration (FDA) voted 13-1 (with one abstention) to add a warning about the risk of gadolinium retention after use of gadolinium-based contrast agents.

In October 2016, according to the firm, Cutter Law filed the first gadolinium deposition disease lawsuit against the maker of a gadolinium-based contrast agent, alleging patients were not properly warned about the risks associated with gadolinium retention. Since that time, they have filed several lawsuits for victims living across the country in both state and federal courts, Chuck and Gena included.

As CBS News reports, the Norris’ lawsuit acknowledges no official, publicly stated link between gadolinium and symptoms reported by people who believe the metal has affected their health. But that’s in part because blood and urine testing for gadolinium only became available recently and most doctors were not aware of any disease that was associated with gadolinium other than one that affects people with kidney problems, the lawsuit said.

The lawsuit accuses the manufacturers of knowing about the risks associated with gadolinium but doing nothing about them.